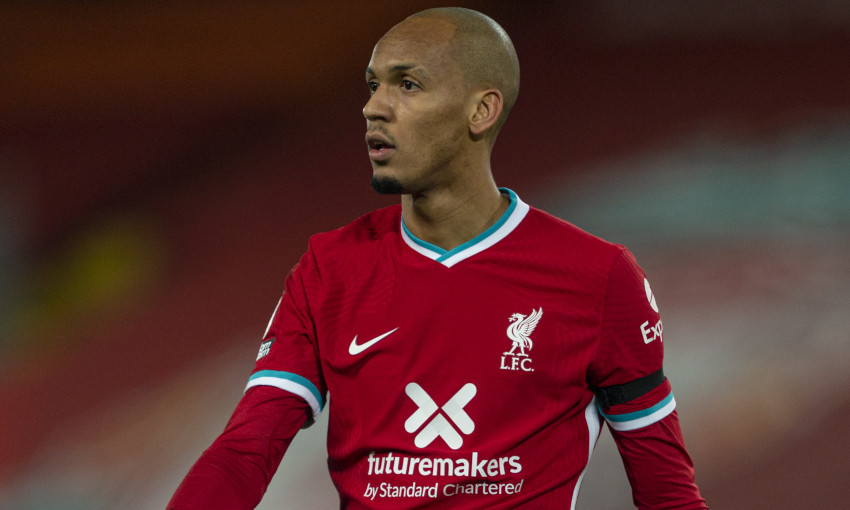 Fabinho explained why strong communication with his teammates is crucial to making his switches from midfield to defence a success.

The No.3 returned from injury at centre-back as Liverpool recorded an accomplished 3-0 victory over Leicester City in the Premier League on Sunday evening.

Deployed alongside Joel Matip and with James Milner filling in at right-back, Fabinho helped snuff out the Foxes’ threat at one end while Diogo Jota and Roberto Firmino added to a Jonny Evans own goal at the other.

Fabinho’s satisfaction with being out on the pitch and contributing to a win was increased further by the Reds securing a clean sheet.

And speaking to Liverpoolfc.com after the final whistle, the Brazilian detailed how he approaches the differing responsibilities in defence and midfield.

“Centre-half, I try to be always in good communication with my teammates – Joel, Robbo, the players around me. They help me a lot,” he said.

“We knew we were playing against a very good team and a very dangerous striker [Jamie Vardy] but the communication was very important for that as well.

“I know in this position I have to be concentrated every minute of the game and I’m happy because we kept the clean sheet.

“I’m very happy to be back as well, to play the 90 minutes and win the game 3-0. I feel good, no problems. I’m happy because I’m back and played the full game.”

Liverpool’s already significant list of sidelined players had increased since their previous outing at Manchester City a fortnight earlier.

But the Reds met the challenge of coping without them emphatically as they put to the sword a Leicester side who had won six of their previous eight Premier League fixtures, including four on the road.

“We knew we had some important players injured but everyone is ready to play and ready to give 100 per cent on the pitch,” said Fabinho.

“We had a lot of occasions to score and 3-0 is fair enough for our [chances].”

As well as moving the reigning champions level with Tottenham Hotspur on 20 points at the top of the table, the result created history.

Jürgen Klopp’s team are now unbeaten in 64 consecutive home league matches since 2017 – the longest run of its kind achieved by the club.

“It’s just unbelievable. I’m happy to be part of this team, part of this history,” added Fabinho, who is among the Reds players yet to have lost a Premier League fixture at Anfield.

“We just have to keep this mentality, to try to win every game because we know our qualities, we know here at Anfield we have to always play to win. I’m happy to be part of this history as well.”