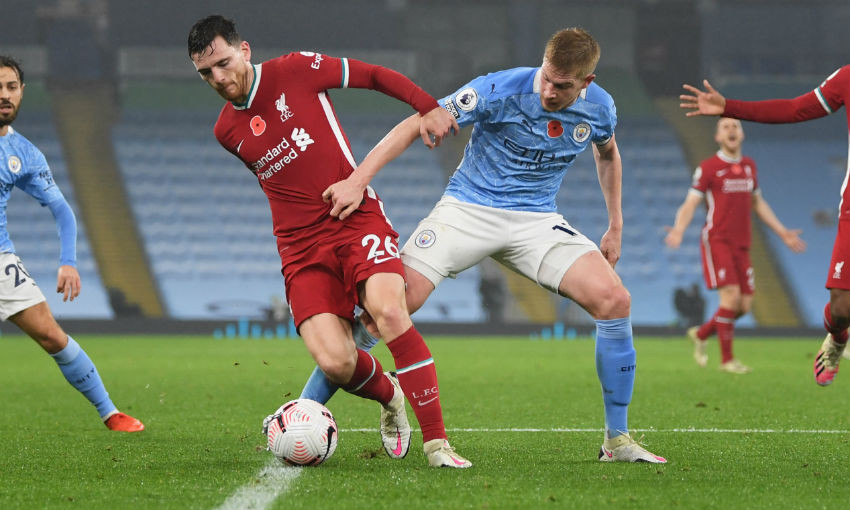 Andy Robertson offered an assessment of Liverpool's 2020-21 season so far as he encouraged his teammates to 'attack' the upcoming period.

The Reds head into the November international break sitting third in the Premier League standings and with a flawless record at the top of their Champions League group.

Battling a packed fixture schedule and injuries to key personnel, Robertson has been pleased with what Jürgen Klopp's men have produced – but stressed the squad are out to deliver even more.

"We are always hungry for more," the left-back told Liverpoolfc.com in the aftermath of Sunday's 1-1 draw at Manchester City. "As footballers, we are always a bit greedy for a little bit more.

"But look, we have to be happy. I think when we started getting some injuries and lost a couple of players with COVID-19 and stuff, everyone expected the wheels to fall off.

"But we've managed to steady the ship a little bit and pick up some great results, especially in Europe.

"In the Premier League we've maybe not been at our best at times but we've picked up results and that's why we are near the top of the league.

"I think this was one of our best performances in a while and hopefully we come back from internationals full of confidence and we can really kick on because we are a good team.

"We will have lads coming back from injuries hopefully and we will only get stronger for that, so long may that continue.

"Hopefully we don't lose anyone during the internationals. We know we've got really important games – mine is the biggest for our country in a long, long time – but I hope we all come back fit and healthy.

"I hope we go and attack this Christmas period because it's going to be hectic, but we have dealt with it pretty well in previous seasons and that's what we need this season."

Robertson also believes Liverpool are stronger this term with even greater squad depth and versatility.

Klopp decided to line up with four attackers for the start of Sunday's draw at City, with Diogo Jota joining the regular front three in the starting XI.

Robertson commented: "Look, that's what happens with players like Diogo – who scored a hat-trick in midweek, he's scored so many goals – and obviously the manager looked at it and thought, 'I have to get him in the team'.

"I thought we did it pretty well and we can adapt, and it means that we can maybe play it more often – but the 4-3-3 has worked so well for us. So we won't play it all the time, but it means we can adapt to certain teams, certain situations and it's about us evolving as a team. So that was a big step."

Wanted more from the game but we’ll take the point and move on! Now it’s 🏴󠁧󠁢󠁳󠁣󠁴󠁿 time https://t.co/An5z8LRvWy

Mohamed Salah gave Liverpool the lead at Etihad Stadium from the penalty spot on Sunday before Gabriel Jesus drew the clash level once again.

Kevin De Bruyne missed a spot-kick towards the conclusion of a frantic first half, but the tempo of the fixture then somewhat subsided following the break.

"A point is a fair enough result for both teams, I don't think we can have much arguments," the No.26 assessed. "We had to capitalise on surprising them a wee bit with our formation and having the lads between the lines.

"I thought we were excellent the first 20 minutes and were on top. We took a deserved lead but good players adapt to situations and Manchester City started to adapt and started to work out how to fix that. Then they started causing problems of their own.

"The goal, the ball has just come in between bodies and came through, which is unfortunate. Then lucky for us, the penalty and luckily a quality player has missed it. After that, there wasn't many chances.

"I think if we had just had a bit more quality in the final third, we could have maybe got through. But all in all, a good performance from us, a decent enough result.

"Now we are all off on internationals all over the world and hopefully we all come back fit and healthy and then we go into the hectic Christmas schedule."