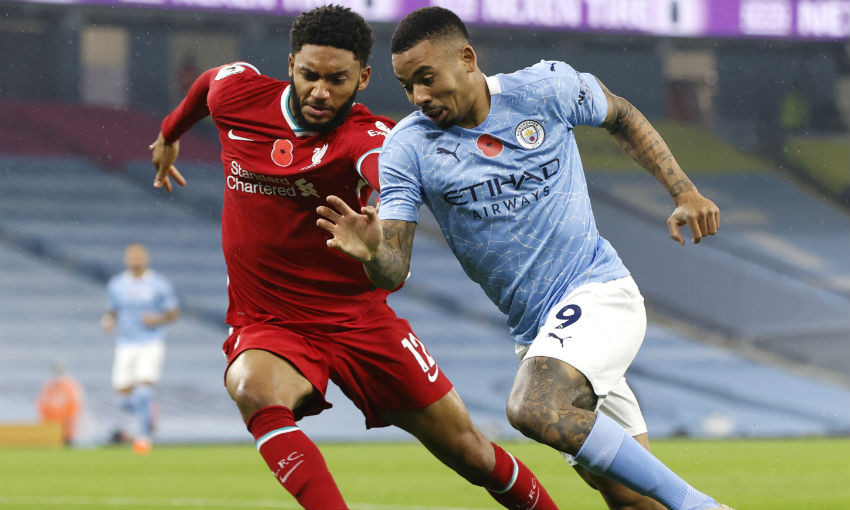 Joe Gomez believes the point Liverpool earned away at Manchester City on Sunday was a fair reward after an end-to-end encounter finished 1-1.

Mohamed Salah gave the visitors the lead from the penalty spot inside the opening quarter of an hour before Gabriel Jesus restored parity in the 31st minute.

City could've gone ahead in the fixture but saw Kevin De Bruyne send a spot-kick wide just before half-time and the sides shared the points.

Reacting to the game, Gomez told Liverpoolfc.com: "We had our chances. I suppose it probably is a fair reflection of the game in the end.

"Some frustrating decisions at times but I thought we started the game well and had a good intensity about us in the first half.

"It slowed a bit in the second and both teams, I think, were a bit more conservative.

"At the end of the day, we know how good City are and we've come away from home and got a point, so I think we've got to take that.

"As I said, it's not an easy place to come and we have to accept that we had our chances and so did they.

"So I think a point is a fair reflection. We go into the international break now and hopefully we all come back healthy and ready to go."

The No.12 was adjudged to have handled the ball inside the area after a VAR review, leading to the awarding of the penalty De Bruyne squandered.

On the handball decision, Gomez commented: "I wouldn't dispute it hit my hand but at the end of the day, I'm running back towards goal and everyone knows the power De Bruyne can hit the ball with.

"It's just a natural motion for me to run. I haven't made an attempt to put my arm towards the ball, it's just happened that quick.

"At the end of the day, it's the ref's decision. There's enough conversation going on around that rule and what's going on, but you just have to move on and accept what's happened."

Gomez was joined in the heart of Liverpool's backline by Joel Matip at Etihad Stadium as the latter made a comeback from injury.

Great to have Joel back tonight 👊🔴 https://t.co/sHvIcKrAwz

It was the first time the pair have started together at centre-half for the Reds, with Gomez encouraged by the early signs of their partnership.

"Everyone knows how good he is and, for me, he is world-class," the 23-year-old continued. "Obviously we've got a big miss in Virgil but I enjoy playing with Joel and we've just got to keep pushing and keep getting points together as a collective."