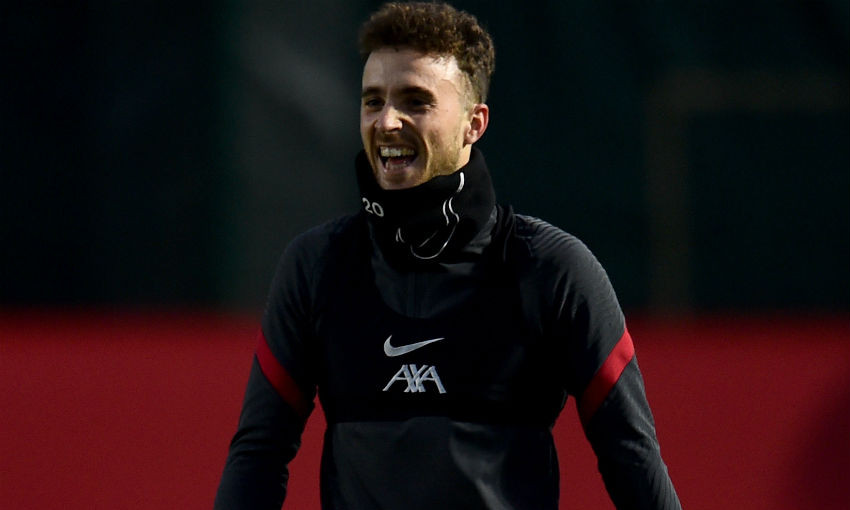 Liverpool will be without Thiago Alcantara against Manchester City on Sunday but Jürgen Klopp has allayed any concerns regarding the fitness of Diogo Jota.

Klopp confirmed on Friday that Thiago is not yet ready to return following the injury he sustained during last month’s Merseyside derby, though Jota - who picked up a slight knock after scoring a hat-trick versus Atalanta BC in midweek - is set to be available for the trip to Etihad Stadium.

Meanwhile, Naby Keita, Joel Matip and Kostas Tsimikas were all involved in the Reds’ matchday squad in Bergamo after each experiencing lay-offs, and Klopp reported no new setbacks for the trio.

“They are all in training, so that’s really good,” the boss told Liverpoolfc.com. “Nobody mentioned Diogo to me. Yesterday [Thursday] was second-day recovery, he was involved. So that looked fine.

“With Thiago, that’s how it is. It’s an injury but doesn’t need a surgery, all these kind of things, but still takes time.

“The challenge that day was a harsh one and directly against the leg, so still adapting but improving. It will not be too long anymore but for this game I don’t think he will be in.”

Klopp later stated during his pre-match press conference: “The longer he is out, the longer he has to train before we consider him as a starting line-up player. Thiago will not be available for Sunday.”

The manager also noted that Fabinho and Alex Oxlade-Chamberlain are ‘doing well’ in their respective recoveries, but neither will be involved this weekend.

James Milner and Joe Gomez could both reach appearance landmarks on Sunday. Milner is one shy of his 550th career league match, while Gomez could play his 100th league game.

Inside Training: Watch the Reds prepare for City trip

For City, Pep Guardiola ruled Sergio Aguero out by telling the media on Friday: “No, he’s not ready. Not yet.”

Fernandinho has been absent for City’s last four matches, while Benjamin Mendy has missed their last six.

On the prospect of meeting Liverpool, Guardiola said: “It is always nice to play against the strongest teams possible.

“Last year, they were stronger. They have been an exceptional team for a long time, with an exceptional manager. It is nice to face them to improve our level.

“When you play against teams like Liverpool and other teams you always have moments where you have to suffer. We know it. We have to do it.

“We’ll try to use it to our strengths as much as possible. We know each other quite well. We have played each other many times.

“There will be up and down moments. We need to take our chances and be clinical.”