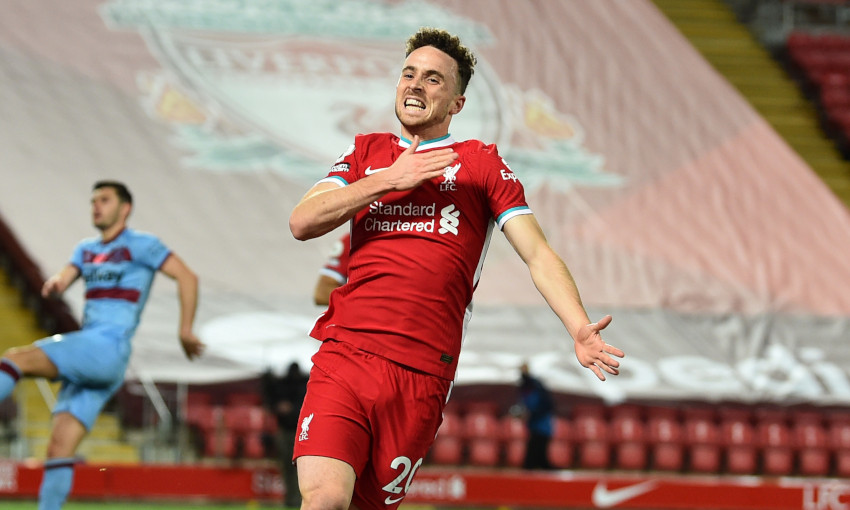 Atalanta 0-5 Liverpool: How it unfolded

Diogo Jota fulfilled Jürgen Klopp's instructions to 'be lively' as he came off the bench to give Liverpool a 2-1 win over West Ham United.

The Portugal international scored a crucial goal for the third time at Anfield in a week, following up strikes against Sheffield United and FC Midtjylland with the decisive finish in Saturday’s Premier League clash with the Hammers.

Sent on alongside Xherdan Shaqiri with the score 1-1 in the second half, Jota collected a pinpoint pass from his fellow substitute and swept it in at the Kop end to secure three points.

“It means a lot, of course,” the No.20, who had seen a previous effort ruled out after a VAR review, told Sky Sports post-match of his latest goal.

“[I was] always on the bench seeing the game and thinking what I could do different to unlock the result. Fortunately, I did two goals, just one counted but in the end we got the victory.

“The most important [thing] was the win and we just want to keep winning games.”

Quizzed on what the manager had asked of him when he was introduced in the 70th minute, Jota replied: “To be lively. Of course, with the game time the other team gets tired, so we need to do movement, movement.

“Fortunately, in the end I got the space, a great pass from Shaq and I could score.”

The 23-year-old’s winner represented his fourth goal for the Reds since completing his transfer from Wolverhampton Wanderers last month, on his ninth appearance.

And Jota’s enthusiasm and readiness remain the same, he insists, whether he is named in Klopp’s line-up from the start or used from the bench.

“Look, I played two games in the starting XI before this one. This is a team. The manager chooses the XI and then we just need to do our job,” he added.