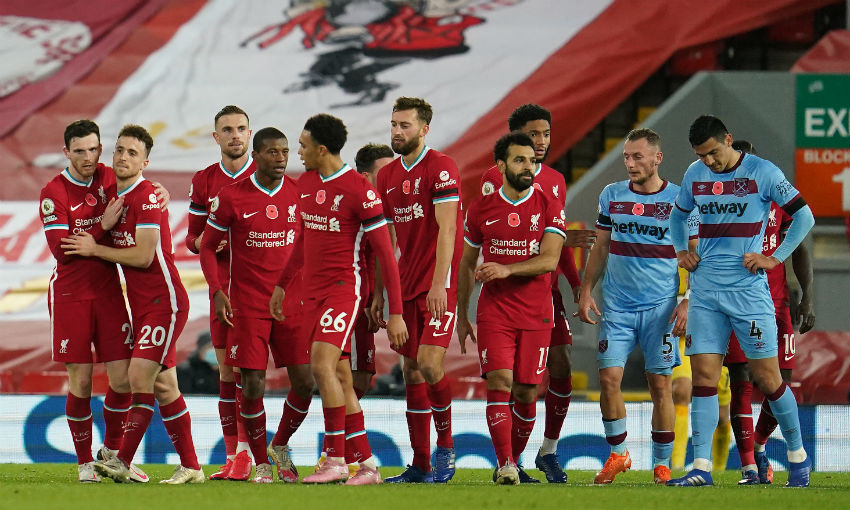 Vote now: Who was LFC's Men's Player of the Month in October?

Diogo Jota was again the match-winner at Anfield as Liverpool came from behind to beat West Ham United 2-1.

Pablo Fornals had given West Ham an early lead that was cancelled out by Mohamed Salah’s penalty in the closing stages of the first half before substitute Jota - who had been denied a goal following a VAR review a few minutes earlier - popped up to secure a win that moves the champions to the top of the Premier League.

Nathaniel Phillips came in for his Premier League debut as Joe Gomez’s central-defensive partner, while Curtis Jones started in midfield and Trent Alexander-Arnold made his 100th top-flight appearance for Liverpool.

The Reds made the early running in an attacking sense but it was the visitors who hit the front when Fornals collected Gomez’s attempted headed clearance from Arthur Masuaku’s cross and arrowed a low finish past Alisson Becker.

A positive response was forthcoming from Jürgen Klopp’s team, who circulated the ball quickly while probing and seeking to locate the gaps in West Ham’s well-stocked defensive unit.

Jordan Henderson went close to levelling midway through the half, the captain steering a low shot narrowly wide from 20 yards after Salah had teed him up.

A sharp one-two between Sadio Mane and Roberto Firmino then allowed the former to find Andy Robertson with a clipped cross, but the left-back’s ambitious volley cleared the crossbar.

Liverpool did force the equaliser prior to the break, however, with Salah being felled in the area by Masuaku and duly stepping up to blast his spot-kick home low and down the middle of Lukasz Fabianski’s goal.

7 - Only Fernando Torres in 2009-10 (eight) has scored more goals in Liverpool's opening seven matches of a Premier… https://t.co/72hCJz7Yyu

West Ham fashioned the first chance of note following the interval, but Fornals was foiled by a crucial Robertson block after he’d latched on to Sebastien Haller’s flick-on.

That escape appeared to jolt Liverpool into life somewhat and a glorious pass from Henderson found Robertson sliding at the byline to keep the ball alive, only for the Hammers to scramble clear.

Klopp freshened things up with 20 minutes remaining by bringing on Jota and Shaqiri in place of Firmino and Jones, with Salah subsequently switching to a central berth, while Mane took up post on the right and Jota was deployed on the opposite flank.

It seemed that Jota had scored earlier than the goal that eventually settled the game as the No.20 fired in the loose ball once Fabianski had saved Mane’s effort, but the strike was disallowed for a foul by the Senegalese following a VAR review.

The No.20 was not to be denied, though, as he coolly stroked home Shaqiri's beautifully-weighted pass following an excellent team move to seal all three points.

3 - Diogo Jota is just the second player to score in all of his first three @premierleague appearances for @LFC at… https://t.co/JBl6iPLQ8A