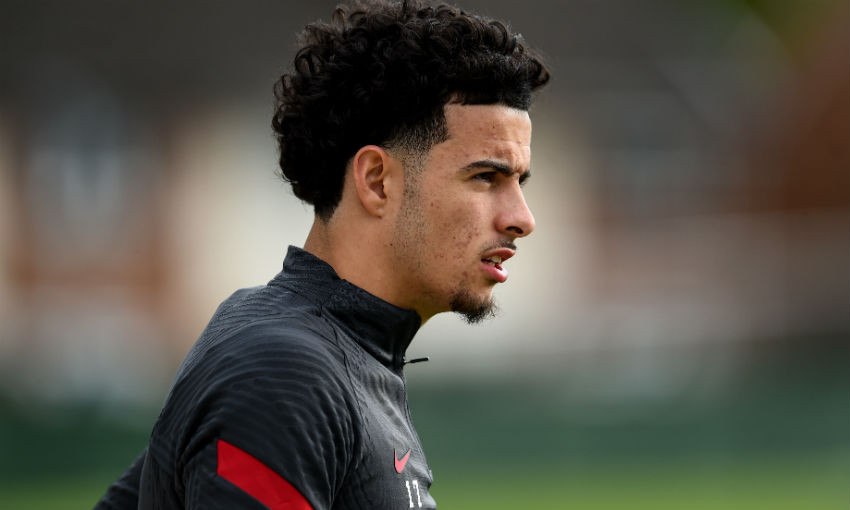 Curtis Jones is relishing the prospect of another opportunity to shine in Liverpool’s Carabao Cup tie against Arsenal tonight.

The Reds welcome the Gunners to Anfield for the second time in 72 hours following Monday’s 3-1 Premier League win, with a spot in the competition’s quarter-finals up for grabs.

Academy graduate Jones was named Man of the Match for his outstanding, two-goal performance in last week’s 7-2 victory over Lincoln City in the third round - and he has set his sights on impressing once again on Thursday evening.

“As you’ve seen, I’ve come on leaps and bounds since I’ve been playing more games,” the Scouser told Liverpoolfc.com.

“The competition here is a good one for me to get game time and to show what I’m capable of doing, so I look forward to this competition and hopefully I can get more game time.

“I think for any young kid that’s around the first team and is waiting for his chance, the opportunities that you get you need to take. So, as I said, the competition I’m playing in is one I can get a good bit of game time and show what I’m capable of doing.”

Read on for more from our pre-match interview with Jones…

Did the team’s display against Lincoln show the desire among the squad?

Definitely. I think for a player like me around the team I get to see how, I won’t say the ‘main’ team, but the boys that start play and prepare and train and stuff. I try to take that and put that in my game and go and try to do the same and try to give the manager what he wants to see from me and the rest of the team that are playing. That’s what I try to do and I’ll continue to do that.

How pleased are you with your progress now that you’re a regular member of matchday squads?

I wouldn’t say I’m a ‘regular’, but I would say that I’m not too far [away]. I’m still a young lad and I’ve still got a lot to learn and there are great people around me that I’m learning from. I’m getting better and better each game that I play and each session that I have with the first team, so I’m grateful to the manager and his staff for having me around and showing so much belief in me and giving me the opportunities that I’m getting.

Was the game against Lincoln one of your best and most enjoyable individual first-team performances so far?

Do you feel more comfortable as a first-team player now compared to the start of last season?

I wouldn’t say ‘more comfortable’ because I’ve always been comfortable since I came here [Melwood], but I just had a few more things to learn and a bit more maturing to do. I think I’ve just got more mature as a player and a person and it’s benefiting me.

You always seem very calm and collected - does anything faze you or stress you out?

Do you still approach the game in the same way you did as an Academy player?

Yeah, of course. I’ve been successful at the Academy and I’ve done that by playing a certain way so I try to keep that here. But as I said before, you’ve got to mature and change your game slightly so I’ve done that as well and I think it’s come together well. As I said, again I’ve still got a lot to learn and I’m learning each day.

You scored in the penalty shootout against Arsenal in the Community Shield and got the winner in last season’s Carabao Cup shootout. Would you take one again if it goes to penalties on Thursday?

Definitely, definitely! I like to be one of them that when things are not 100 per cent I am there to try to put it right. It’s not even about taking the glory or nothing like that, or handling the pressure right or showing that I’m a confident kid, it’s just that I like to try to take the game by the scruff of the neck and try to stand up when things aren’t going right. So I think that penalties are something that some people see as a bit of luck but to me it’s a chance to put things right. The game has been a draw after 90 minutes so now it’s your chance as a team to put it right and come away with the win. That’s how I see it.

Finally, how tough a game will it be against Arsenal?

I think they’ve got a point to prove after the last game that we had against them in the Premier League. We also had a point to prove because they beat us in the Community Shield, so we showed what a great team we are and we came away with a win. I don’t think they’ll be happy so as I said they’ll have a point to prove and have got things to put right. They’re a strong team and they’ll give it 100 per cent and come out fighting, but I think we’re definitely prepared and know what they’re going to do. We know it’s going to be a difficult game, but the boys are excited and we can’t wait for the game to get started.