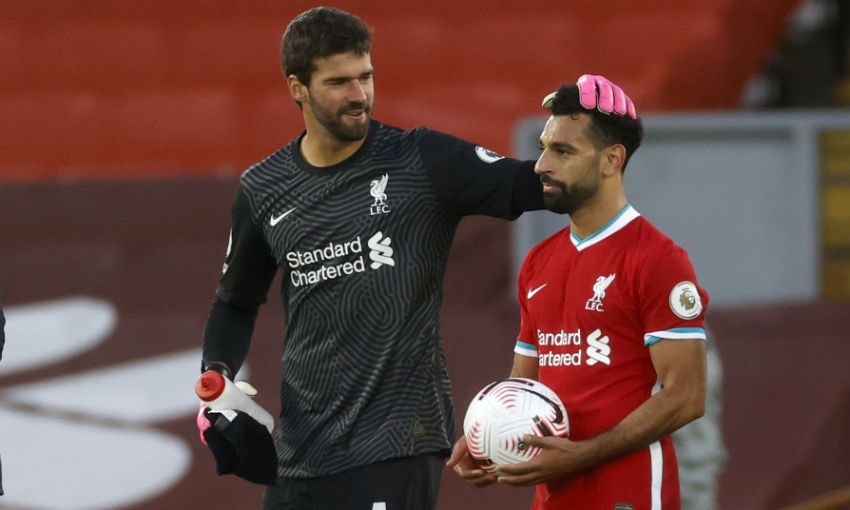 Alisson Becker expressed his delight to have Mohamed Salah as a teammate and three points on the board after a thrilling victory over Leeds United.

Liverpool opened their 2020-21 Premier League campaign with a 4-3 win over Marcelo Bielsa's newly-promoted side at Anfield on Saturday evening.

Salah netted a late penalty to confirm his hat-trick and secure the result for the champions, with Alisson believing such potency is a sign of things to come from the Egyptian this term.

The goalkeeper told Liverpoolfc.com: "He's hungry, he's started the season hungry and I'm happy because of this. He's a really important player for us.

"This gives him confidence and also pushes the other players to work even harder.

"We have a lot of quality with our front three. Sometimes just one scores but we know that everybody can improve from this game in the defensive phase and in attack. It's a good start for us.

"We know what we were waiting for and what their [Leeds'] attitude would be on the match.

"I think they are a really good team with good quality but with a brave heart also. They made our night difficult tonight but I think their night was even more difficult because of the way we played.

"I'm happy to have Mo Salah on the team and that he scored a hat-trick in the first official match of the season. I'm really happy for the three points also."

Jürgen Klopp's side were repeatedly pegged back by Leeds until Salah's settler in the 88th minute.

Alisson detailed the Reds' acquired ability to constantly keep on pushing in pursuit of victory.

"It's something that is inside of us," the Brazilian added. "Obviously we work every day really, really hard to arrive at the ground and do our best.

"Sometimes you work in some way and the opponents adapt between the game and we have to adapt also.

"It was just the first match of the season and I believe we have many things to improve but those things will come with the games."