Trent Alexander-Arnold is physically and mentally ready to go this weekend as Liverpool kick off the new Premier League season.

The newly-crowned PFA Young Player of the Year has yet to feature for the Reds since the 2019-20 campaign concluded in July.

A minor injury ruled him out of the training camp and friendlies in Austria, plus the FA Community Shield at Wembley, and he then joined up with England.

But Alexander-Arnold played 103 minutes across the Three Lions’ two UEFA Nations League matches, including a start against Denmark on Tuesday night.

Now back at Melwood with his clubmates, the No.66 is ‘enthusiastic and eager’ to hit the ground running as Liverpool defend their title. 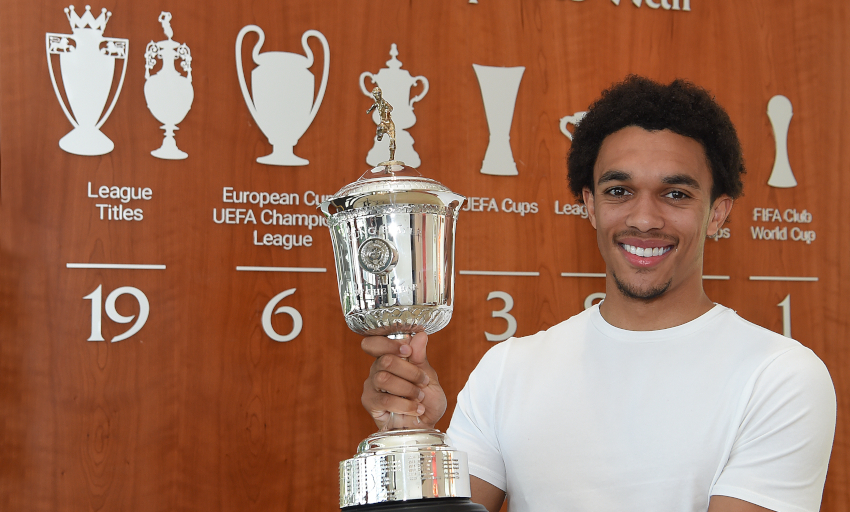 “All good,” Alexander-Arnold told Liverpoolfc.com of his fitness on Thursday. “I obviously played 80-85 minutes the other day for England; I felt good, I felt fit, and obviously no niggles or injuries off the back of that. So, I’m feeling good.

“Coming back into training today, obviously excited for the weekend. It’s obviously a tough test, a newly-promoted team is always a little bit tough on the first day – but I’m sure we’ll be ready for it.”

The new season gets under way just seven weeks after the previous one finished, with the Reds set to host Championship winners Leeds United on their return to the top flight after 16 years away.

“Yeah, it’s always the case really when you stop playing football for a little bit; you lose that rhythm in your game, you lose a little bit of your touch and you just need to sharpen up,” he said.

“But it comes with games and playing time – being involved in training and games. I’m sure the lads will all be ready and we will get it back to 100 per cent as soon as possible.”

The 21-year-old added: “Obviously I’m enthusiastic and eager to play every game that I can. It’s not in my hands whether I do play or I don’t, I’m just always trying to be available to play, be as fit as possible, make sure I recover right and make sure I’m ready if I am told to play.

“I have played a few games over the last few years, so it’s about maintaining those levels and trying to make sure I stay injury-free and keep pushing on.”

Minutes before he took to the pitch in Copenhagen for his country on Tuesday, Alexander-Arnold was confirmed as the PFA Young Player of the Year for 2019-20.

His name has been added to a prestigious list of winners, which has included four Reds previously: Ian Rush, Robbie Fowler, Michael Owen and Steven Gerrard.

“I’m proud to be amongst those names, especially the Liverpool ones obviously,” he reflected. “But the Premier League legends that have won it in the past also.

“But especially the Liverpool players whose names won’t be forgotten any time soon. Hopefully if I keep doing things right, I’ll be able to keep pushing forward like they did.”

Explained: How Liverpool's right-hand side has evolved this season