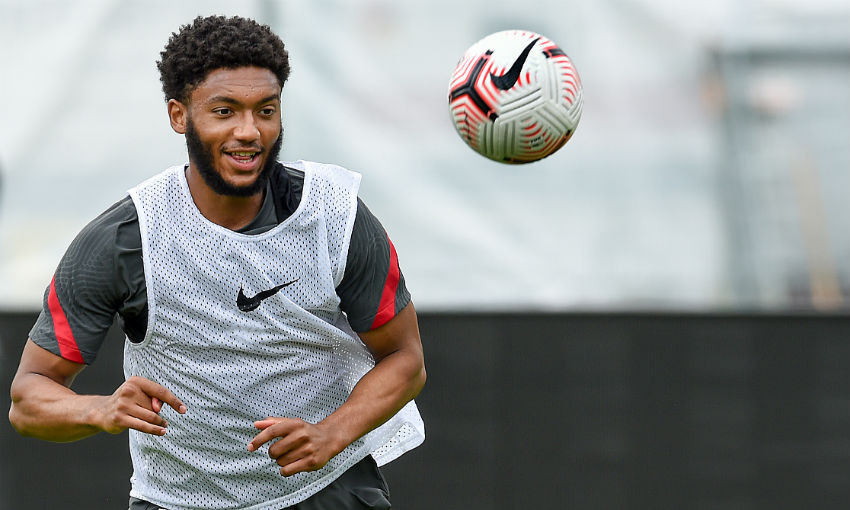 Competition and intensity have been ever-present features of Liverpool's Austrian training camp.

On the pitches, the workouts performed by Jürgen Klopp's side have been full-on and frequent.

During one evening session, for example, James Milner boasted about being part of a career-best rondo that involved around 80 passes.

"Fortunately I wasn't in that box, but I can imagine it," Joe Gomez concedes, during a sit-down interview with Liverpoolfc.com at the team's hotel on the outskirts of Salzburg.

"Millie's box is always intense. You never want to be stuck in the middle and have to go again.

"It's good. In different phases and in different things, we're always competitive and it works well that way.

"You've got to train the way you play, I suppose, and that's something the gaffer emphasises.

"It's obviously at times been tough and had some tired legs on some days, but it's part and parcel and you can't expect anything different in pre-season really."

Inside Training: Mini games and 'keeper drills in Sunday's session

The effort required in training has, therefore, led to siestas becoming a popular afternoon activity in between sessions.

"Essential," Gomez believes. "Not much beats an afternoon nap.

"It's more so for recovery and just switching off a little bit. There's not much else to do and I suppose that's the point of a training camp really."

Even when afforded some extended downtime, the Reds' competitive streaks have still been demonstrated.

A table tennis tournament involving the players and backroom staff on Thursday ended in victory for Mohamed Salah and Sadio Mane, the pair beating Tom King and Dave Rydings from the fitness department in the final.

Gomez and partner Carl Lancaster, one of the club's kit management co-ordinators, bowed out early on.

The centre-half details: "We were an early exit unfortunately against Robbo, which I don't think was a justified loss but it's part of the game. We left gracefully.

"Mo and Sadio were deserving winners. It was a good match-up, to be fair.

"The standard is decent in some games but it's more so just bragging rights and giving some trash talk really. It's a bit of fun."

After training on Sunday, Gomez was shooting free throws with Mane and Virgil van Dijk.

Gomez’s defensive colleague proceeded to ensure everyone in the vicinity was aware of his streak of eight straight conversions.

"He's good at free throws," Gomez admits, reluctantly. "It's the NBA finals at the minute, so it's interesting to watch and it's just something else, a different sport to tune into."

Of course, it should come as no surprise to hear competitiveness runs deep throughout a team that have lifted football's biggest prizes within a 14-month spell.

But Gomez believes these kinds of off-the-pitch activities have helped contribute in some way to that recent success.

"It's a healthy environment and definitely a plus," the No.12 says. "Just being able to have that banter with each other and be able to rub it in each other's face in something that's not always football, it just helps and sort of takes the edge off things when you do it on the pitch.

"It's just the nature of things and I think that's one of the balances in the squad that's so perfect – we can tell each other and speak our minds when it's serious and when it's banter and take it on the chin.

"Just being comfortable with each other and being able to push each other has been essential.

"I think that environment is created by the gaffer, first and foremost, and through the leaders in the team – Millie, Hendo, Virg. All of us have been able to adopt that as well and just being comfortable with each other as well."

The competitive fixtures are edging ever closer, with the Premier League champions due to contest Arsenal in the Community Shield on Saturday.

After beating VfB Stuttgart 3-0 in their first pre-season friendly of 2020-21, Liverpool have one final dress rehearsal on Tuesday when they take on Salzburg to wrap up their Austrian trip.

Gomez concludes: "In terms of the game the other day, I think a lot of us had in mind, 'In a week from now we play in the Community Shield.'

"We've got to emphasise getting in the rhythm of things and getting the good habits back in place as soon as possible.

"Even though it's a short break, it's obviously important we hit the ground running and in less than a week now there's a trophy up for grabs.

"I definitely think we can't just treat them as friendlies and more so the foundations to put in a good performance on the weekend."

Watch live coverage of Tuesday's friendly against Salzburg on LFCTV GO. Use code 2021GOFREE to start a free one-month trial of LFCTV GO now - this can be cancelled at any time.