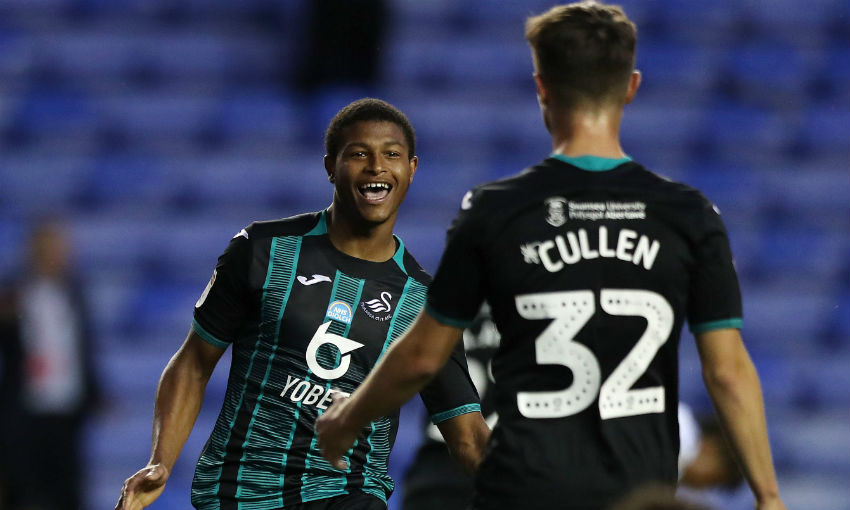 The 20-year-old joined Steve Cooper’s side on a temporary deal in January and went on to net 11 goals in 22 appearances during the second half of the season, helping them reach the play-offs as a result.

Brewster was on target in Swansea’s play-off semi-final defeat on Wednesday evening, which saw Brentford claim a 3-1 victory (3-2 on aggregate) and ultimately end the Swans’ campaign.

Brewster made his debut for the Swans in a 0-0 draw away to Cardiff City on January 12.

The following match saw the Reds’ Academy graduate net just 19 minutes into his home debut, slotting into the bottom right corner to put his side a goal ahead versus Wigan Athletic.

His form continued into February, with Brewster earning a valuable point for the Jacks away to Preston North End.

Further strikes against Hull City and Blackburn Rovers followed as the England youth international took his goalscoring tally to four.

An enforced three-month break then occurred as a result of the coronavirus outbreak, but Brewster made a statement of intent courtesy of a brace in a 3-0 away win at Middlesbrough in his first match post-lockdown.

Addressing this performance post-match, head coach Cooper said: “I’ve not been surprised because I really believe in the boy.

“We know he obviously has the talent to have an impact on games, but I also know he has the drive and commitment and I think that is so important in the league.”

The FIFA U17 World Cup winner was unfortunate not to be on the scoresheet 10 days later when his stunning free-kick against Millwall was credited as an own goal by opposition keeper Bartosz Bialkowski, with the ball bouncing off the 33-year-old’s back on its way over the line, having first struck the crossbar.

“Rhian has that in his locker and, in hindsight, maybe he should have taken the one late on against Luton too,” reflected Cooper at the full-time whistle. “He has that ability; he works hard on it in training. He practises them every day and his returns are good.

“I have seen him do it on many occasions, and you do fancy him on free-kicks. It was a brilliant goal and it’s a good tool to have available to you. I know it came back off the ’keeper, but we’ll be giving the goal to Rhian.”

A run of four goals in the club’s final six outings helped push Swansea into the play-off places, with the youngster notching against Sheffield Wednesday, Birmingham City, Nottingham Forest and Reading.

“That’s where you want him – in the box and scoring goals and if he gets a chance in the box, you fancy him,” said Cooper on Brewster’s goal versus Birmingham.

“It wasn’t an easy finish – you might look back on it and say he should score but he kept it down well and took the opportunity.”

Brewster ended the campaign as the club’s second-highest scorer, despite only joining at the start of the year. Andre Ayew was the only player to find the back of the net on more occasions in 2019-20 and was full of praise for the impact the Liverpool loanee had on the team.

“Rhian has everything to play for,” Ayew said. “He has goals, he has speed, and he has power.

“He is still young, and he has a few things to learn and improve on, but when we are talking about a pure finisher and talent in front of the goal, he has it all.

“He has everything a striker needs to get, and that is very important.