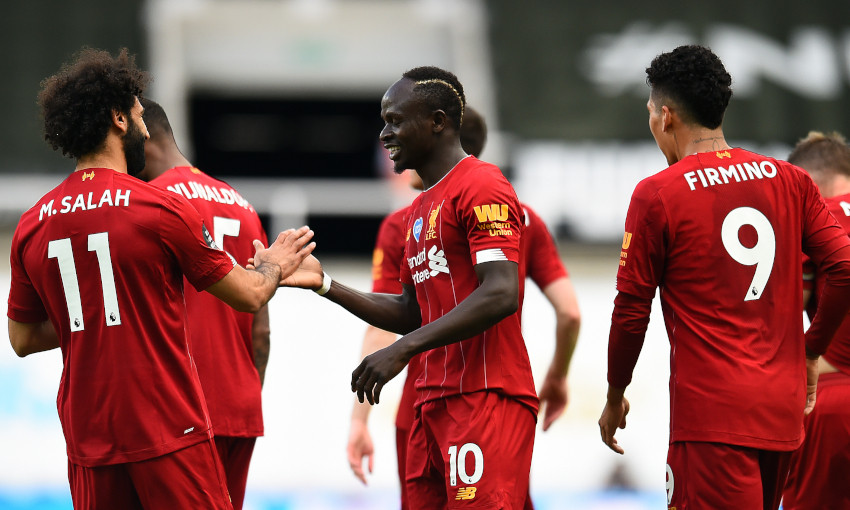 Liverpool capped off a magnificent Premier League season with a 3-1 comeback win at Newcastle United on Sunday afternoon.

The champions registered a 32nd victory in the division this term courtesy of goals from Virgil van Dijk, Divock Origi and Sadio Mane at St. James’ Park.

The Premier League champions have set a new benchmark in club history with their sensational haul, comprised of 32 wins and three draws from their 38 top-flight matches this term.

Origi’s dramatic winning goal on this ground last season came via a deflection off a defender, his header gliding into the net to give the visitors a 3-2 win.

Here, the Belgian again set his side on course for three points at St. James’ Park – but on this occasion with the sweetest of efforts off his right foot.

Moving into a shooting position from the left corner of the Newcastle penalty area, he unleashed a wicked, bouncing strike that nestled inside the right post.

It was an impressively emphatic way to end the forward’s wait for a first goal since December in all competitions.

Van Dijk’s 38th-minute equaliser was the Dutchman’s fifth Premier League goal of the campaign – more than any other defender in the competition this season.

He deftly guided a looping header over Martin Dubravka after Alex Oxlade-Chamberlain burst into space on the right-hand side and picked him out with a cross.

Van Dijk has netted nine times in the top flight since joining the club in January 2018, which is an unrivalled tally among fellow Premier League centre-backs.

He also became the first Liverpool outfield player since Robbie Fowler in the mid-1990s to achieve successive ever-present league seasons.

5 - Liverpool's Virgil van Dijk has become only the fifth outfield player to play every single minute in a season f… https://t.co/KDUOnRnSub

An early concession, a steady comeback and some excellent goals. Sound familiar?

Today’s game was a carbon copy of the meeting between the sides back in September 2019, when Liverpool recovered from a deficit to beat the Magpies 3-1.

The result represents a 13th league double over an opponent this term and a 14th away victory of the top-flight campaign – both new club records for Jürgen Klopp’s charges.

See you in seven weeks

And so the restarted Premier League season has concluded after nine games in five weeks for the newly-crowned champions.

There won’t be too much time to bask in the achievement, however, as it was confirmed on Friday the 2020-21 campaign will get under way on September 12.

That means there are only seven weeks until Liverpool’s defence of their 19th league title – and attempt at a 20th – begins.