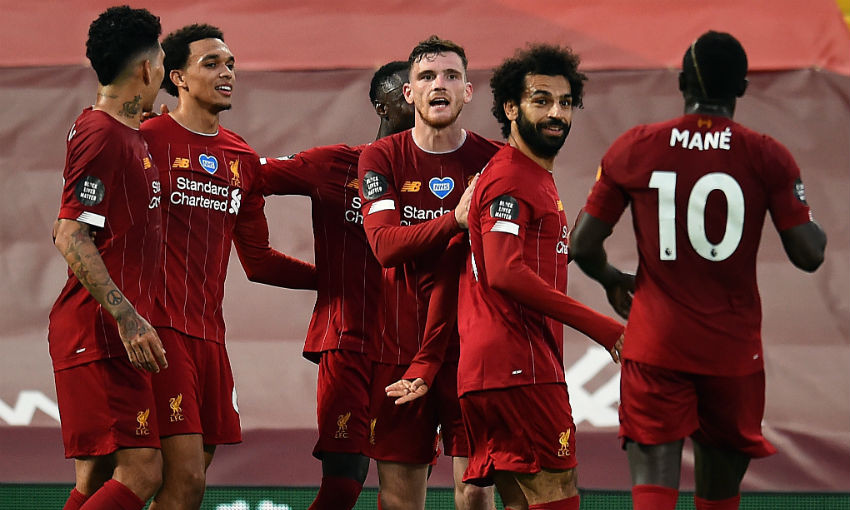 Liverpool ensured they would receive the Premier League trophy following a win by beating Chelsea 5-3 in a pulsating clash at Anfield.

The champions’ final home game of an historic season proved to be a thriller, with Naby Keita’s stunning blast added to by a trademark, exquisite Trent Alexander-Arnold free-kick and Georginio Wijnaldum’s fine volley.

Frank Lampard’s side pulled one back in first-half stoppage time through Olivier Giroud, but Roberto Firmino’s header made it 4-1 early in the second period.

Tammy Abraham and Christian Pulisic then struck to hand the visitors a route to an unlikely point, but Alex Oxlade-Chamberlain completed a classy counter-attack late on to secure a club-record 31st Premier League victory of the campaign.

Keita came in for Oxlade-Chamberlain in the only change to Liverpool’s starting XI.

James Milner returned to the bench, while Adam Lallana was named in the Reds’ matchday squad for the final time.

Amid a frenetic opening to the game, Chelsea spurned the first clear-cut chance with eight minutes on the clock when Mason Mount miscued his header from Reece James’ cross.

The champions responded by knitting together a lengthy passing sequence that concluded with Mohamed Salah attempting a one-two with Wijnaldum. The No.11 appeared to be impeded by Antonio Rudiger as he darted into the box, but no penalty was forthcoming.

James then whistled a shot over as the high tempo showed no sign of abating, before Keita crashed the Reds into the lead midway through the half.

Having combined with Wijnaldum to dispossess Willian, the midfielder strode forward with purpose and hammered a vicious, rising drive in off the crossbar from just outside the area.

Buoyed, the Reds continued applying pressure on Chelsea’s goal and surged further ahead before the break thanks to Alexander-Arnold and Wijnaldum.

First, the right-back arced home a sublime set-piece - a near-carbon copy of his effort against Crystal Palace last month - after Sadio Mane’s determined dribble was abruptly ended by a foul by Mateo Kovacic.

And, five minutes later, Wijnaldum reacted quickest to smartly volley the loose ball into the roof of the net when the visitors failed to deal with Andy Robertson’s corner.

Giroud reduced Chelsea’s arrears in stoppage time by sliding in the rebound after Alisson Becker had denied Willian, but the first half undoubtedly belonged to the champions.

Sensational link-up between Salah and Firmino prised the visitors’ defence apart five minutes into the second period, but an uncharacteristically wayward finish by the Egyptian meant it remained 3-1.

Not for long, though.

The Reds’ three-goal cushion was restored as Firmino powered in Alexander-Arnold’s pinpoint cross with his head, but Chelsea quickly pulled themselves back to within two as Giroud squared for Abraham to slot in.

And, with 17 minutes left, Pulisic made it 4-3 by swivelling and firing high into the net following a move down the visitors’ right.

With their sights set on a top-four finish, Chelsea pushed for an equaliser that had appeared hugely unlikely when Firmino nodded in.

But a counter-attack of the highest order put paid to any hopes Lampard’s team had of being only the second side to deny Liverpool all three points at Anfield this season.

From a Chelsea free-kick deep in home territory, the Reds launched a rapid breakaway that saw Robertson charge down the left and deliver a low cross that Curtis Jones dummied to allow Oxlade-Chamberlain to side-foot a controlled first-time shot past Kepa Arrizabalaga.