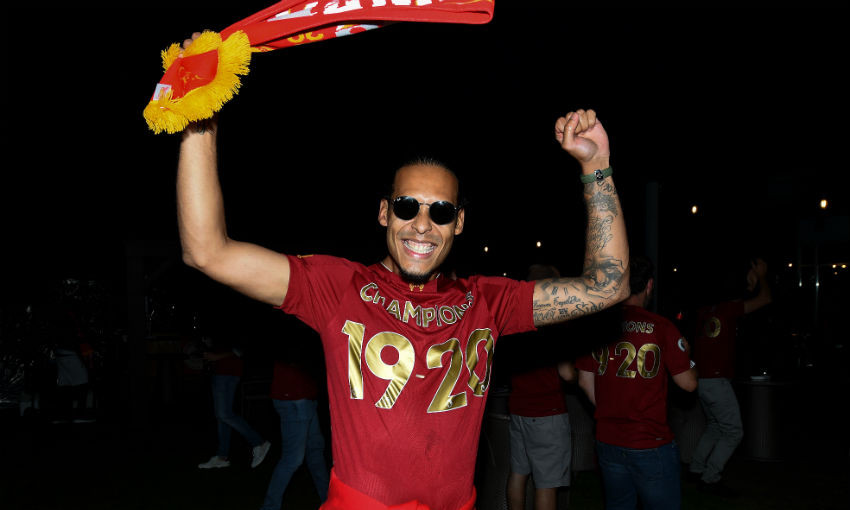 Virgil van Dijk briefly took time to reflect on his 'incredible' ongoing journey with Liverpool after adding the Premier League title to his ever-growing trophy collection.

The top-flight crown represents the fourth collective honour the centre-half has won on Merseyside since making a switch from Southampton in January 2018.

Having won plenty of prestigious individual accolades in that time, too, Van Dijk paid tribute to his special group of Reds teammates, who he's worked tirelessly with over the past two-and-a-half seasons in order to create history.

Read on for our chat with the No.4 in the immediate aftermath of Jürgen Klopp's men being confirmed as champions following Manchester City’s defeat to Chelsea...

Virgil, just how are you feeling?

Emotional but just full of joy. It’s such a good feeling. We’ve worked so hard already this season and we are not finished yet. It’s been a dream come true for all of us already. For me personally, coming to the club, winning the Champions League, winning the Premier League in the two-and-a-half seasons I’ve been at the club, it is just magnificent personally and a dream come true. It’s something I always hoped for when I joined Liverpool. It’s just amazing and it’s amazing to be part of this group. It’s amazing also to be with these kind of players, the manager, the staff, Melwood, all the people there are looking after us. Everyone has to feel like a champion who is part of us, including the fans of course.

Was it important for you guys to be together and watch that moment together when you were confirmed as champions?

It was a lovely day to be together and have a nice barbeque and whatever happened tonight, it was going to be a nice day together. Obviously we knew there was a chance that City may drop points and it was a very intense game to watch. I don’t like to watch too many games but this one was intense, especially after City equalised after a fantastic free-kick from Kevin De Bruyne. But we did it in a fantastic way and fully deserved – and nobody can say anything about this title because we thoroughly deserved it. Personally, I’m just very proud – proud of the team, proud of myself where I came from and my journey I’ve been taking so far. It’s just incredible you know. And to call myself a Champions League winner and a Premier League winner is just something special.

You said in your first answer when you joined Liverpool it was what you hoped for. But surely you couldn’t have imagined that two-and-a-half years down the line you’d be sitting in the chair now as a European champion, a world champion and a Premier League champion, as well as the Super Cup too?

I didn’t have the time to actually sit down and think about what happened over the last two-and-a-half seasons. I think that time will come, I don’t know when, but it will come. It’s just if I think about it right now, it’s just incredible. It’s just something that obviously every player hopes for if they make a step to a different club, to be achieving great things, proving doubters wrong. It’s just fantastic to see the work you put in day in, day out and the work we want to put in as well, everyone wants to achieve great things. Obviously there’s always room for improvement, but this group of players is special and I’m just very proud to be part of it.

What about the fans, they’ve waited 30 years for this. Can you understand the kind of the scale and accomplishment that you and the lads have achieved?

I’ve been getting lots of messages and lots of footage. I come across a lot of people who are obviously Liverpool fans and they keep reminding me how massive it is, but you don’t really need to do it because it’s something I definitely understand. I understood before I joined the club and it’s been such a wait and obviously with the past it will always haunt you a little bit. For me, I joined the club and wanted to achieve so many things and compete on every level. To be here as a European champion, a world champion and now a Premier League champion, it’s incredible. I want to strive for more as well, so we’ll see!

What is your message to the fans and how much are you looking forward to celebrating with them when the time is right?

I wish we could celebrate it right now. It would have been absolutely crazy all together but we have to deal with it. In every Liverpool household, just enjoy it with your family and friends and the time will come, I think, whenever that is. But we always think about you and this one is definitely for you as well. It’s just amazing.

How much are you looking forward to getting your hands on the trophy?

A lot, to be fair! You’ve seen the trophy so many times when I was younger on TV and it’s just special. It’s special for me to lift the Champions League – I’ve ticked that off my box. To get the Premier League now, it’s a crazy feeling. I’m definitely looking forward to it but we’ll see when that will be.