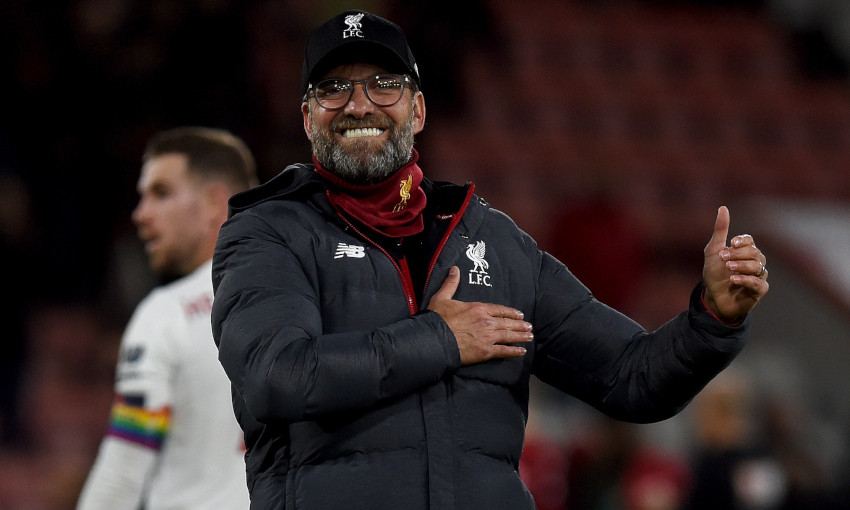 Jürgen Klopp had a simple yet emphatic message after Liverpool clinched the Premier League title on Thursday night: ‘This is for you.’

The Reds were confirmed as champions after Manchester City lost 2-1 to Chelsea at Stamford Bridge, meaning they cannot mathematically be caught in the table.

It ends a 30-year wait to secure the club’s 19th title – and they’ve done so with seven games to spare in the campaign.

Shortly after it was confirmed Liverpool were the Premier League winners, Klopp spoke to Liverpoolfc.com from the hotel where the team had gathered this evening.

Read on to see what the boss had to say…

Watch our exclusive interview with Jürgen Klopp on LFCTV GO

No, unfortunately not because if I tried to start talking about it [how I feel] again I will start crying again and that doesn’t work really well! I am completely overwhelmed; I don’t know, it’s a mix of everything – I am relieved, I am happy, I am proud. I couldn’t be more proud of the boys. How we watched the game tonight together, we knew it could happen, it couldn’t not happen, we didn’t know. We want to play football and we are really happy that we are allowed to play again – then when it happened in that moment, it was a pure explosion. When we counted down the last five seconds of the game, the ref counted down a little bit longer than us so we had to look at two or three more passes! Then it was pure… I cannot describe it. It was a really, really nice moment. Directly after it, I felt so empty inside – I cannot believe it, I am really not happy with myself in the moment that I feel like I feel, but it’s just a little bit too much in the moment. I will be fine, nobody has to worry. I actually couldn’t be happier; I couldn’t have dreamed of something like that and I never did before last year, honestly. We were not close enough three years ago, a year ago we were really close… what the boys have done in the last two-and-a-half years, the consistency they show is absolutely incredible and second to none. Honestly, I have no idea how we do that all the time. Last night, a very good example – we played a game like the stadium is fully packed and everybody is shouting ‘Liverpool’ or whatever constantly. It is a wonderful moment, that’s what I can say.

Tell the world… We are Liverpool, champions of England. https://t.co/altgWn1Wda

There was no alternative. This morning we thought about it, shall we do something and then we thought maybe not compulsory, the boys have to drive a little bit… and then I said, ‘No, we have to make it compulsory, everybody has to be there’ because I am more experienced and I know who will stay at home and watch it alone will regret it for the rest of his life. So, we came here together, it is our bubble, it is the people who are with us everyday, we are all twice-a-week tested so we are fine since we can train again and it’s a nice moment. It is wonderful to share it, but we share it with everybody out there as well because we are here, they are there, but we are all together. My message is: it is for you out there. It is really for you. I hope you feel it. I hope you saw it last night, not only last night but after a long time, last night again. It is for so many people. Kenny Dalglish and Graeme Souness spoke to me on another interview and they were obviously very positive about us. That’s nice, [but it’s] thanks to them because this club is built on what they did. It is built, of course, on Shankly and Paisley and Fagan and all the others, but on these players… Steven Gerrard – this club is built on, in the last 20 years, on Stevie’s legs. He had to carry all of the pressure on his shoulders and he did that exceptionally. I am really happy that we can deliver this title to him as well. The boys love being part of this club, they love being part of the story of this club and the history. It is so nice how we learned how to deal with the history, how we learned to use the history in the last two years. It is just amazing.

On the significance of ending the 30-year wait…

You know it better than I do! Thirty years ago… 30 years ago… I was 23, so I didn’t think too much about winning a title with Liverpool, to be honest! I had no skills for that! Thirty years later I am here and because of the great staff I have, it is unbelievable. Tonight, you see them all together. What Ray [Haughan] did organisational wise, what Mona [Nemmer] did food wise and with nutrition is amazing. What Korny [Andreas Kornmayer] did on a fitness level, what Pep Lijnders did and put into this game, there is so much of his soul in our game now in this short period. It is unbelievable. Pete [Krawietz]… wow… what a… I couldn’t thank them all more. Vitor [Matos] came in and he has lost one game since he is in. Unbelievable. The youth, the players, Neco Williams would not be in this moment or the position he is, or Curtis, or Harvey or now Leighton coming up and Jake Cain coming up, they would not be in this position if Vitor is not here. John [Achterberg] and Jack [Robinson], it is a joy to work with them together every day. It is for Danielle, my PA who I didn’t see for three-and-a-half or four months but she is working her socks off and suffers so much. It is for everybody. It is for Mike [Gordon], Tom [Werner] and John [Henry], our owners in America. We couldn’t reach other, I have 20 calls and them probably as well because I couldn’t catch him so far. It is for everybody; they all put so much effort into it and I am the lucky guy who sits in the seat in this moment and… can be part of this story, it’s so great it is unbelievable.