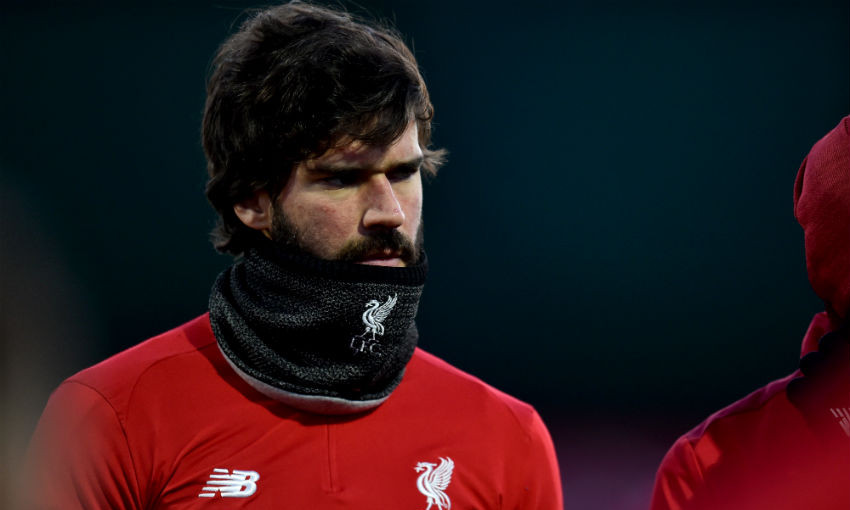 How does Alisson Becker do what he does so brilliantly? In the view of Jack Robinson, it's the perfect blend of preparation, fine athleticism and an impregnable mindset.

Liverpoolfc.com caught up with the first-team assistant goalkeeping coach for insight into the mindset of the No.1 and other Liverpool goalkeepers in different match scenarios.

Read on for Robinson's analysis about those 90 minutes between the sticks for the Reds...

"For the goalkeeper, they want to transfer the pressure basically from themselves to the centre-forward or whoever is taking the one-v-one," Robinson begins.

This can be achieved by holding a position for as long as possible, forcing the player through on goal to make a hurried movement or decision.

Robinson continues: "I think you see with Ali, he's really, really good at doing that – standing up and waiting for the right move to make the correct action or technique."

Information gathered from the pre-match analysis can also be used, having studied the finishing tendencies of the opposition. Instinct usually takes over in the split-second situation, however.

"The goalkeepers have to be able to understand when and where to do things," Robinson states. "We try to put on realistic scenarios or realistic exercises that force the goalkeepers to make decisions in training.

"So hopefully they repeat the correct decisions over and over again in training and when they come to the game, they don't have to think about it – it just becomes a natural decision."

Playing out from the back

One question will be at the forefront of Alisson's mind in this scenario: 'How can I take out as many players that I can, but making sure that we retain possession?'

"If a team is pressing high up the pitch, there's obviously space in behind them," Robinson notes. "You see with Alisson and the runs that Mo, Sadio or Bobby make or one of the midfielders might make, we look to play beyond the team as well. It's exploiting where the space is.

"If teams drop off, it should be simple and easy to play out to the centre-halves and midfielders.

"The nature of how our team plays, we're a fast attacking team. We look to break quickly, so the goalkeepers are always looking to keep the pace and momentum of the game going."

Alisson's comfort on the ball is natural, according to Robinson. His outfield skills and decision-making will be sharpened, though, with certain exercises and playing an outfield role in small-sided matches at Melwood.

"Unbelievable!" Robinson says of the Brazilian's displays in the five-a-sides. "He's like Pirlo or someone like that.

"He's really comfortable on the ball and wants to receive it under pressure. Like you see in the games, that nerve strength, that calmness, he's able to play when there's chaos all around him."

An effort towards goal can come from any area of the pitch at any moment. Therefore, 100 per cent readiness is required at all times.

"The earlier you can get into position, the calmer you can be and the more balanced you can be, the more chance you give yourself of being able to make a save," Robinson stresses.

Being in position to save is just one stage of the process, though. Indeed, manipulating the ball into a safe area is another requirement. Catching is the ultimate aim, but that's not always possible.

The former FA coach adds: "If you catch the ball, you have the opportunity to attack and to break quickly – again fitting into how our team wants to play.

"Deflecting or parrying into the correct areas is really important, so keeping it away from the centre of the goal, pushing it around the post or over the bar.

"We try to put those scenarios on so that the goalkeepers get a feel of where the danger might be.

"If you look at how Alisson works, when he was in Italy he talks about how they worked a lot on having soft hands and feeling when to parry the ball and when to have a strong wrist to push the ball far away, or when to just help the ball into a different area."

You can only truly know when to stay on your line or spring off it with countless hours of drills at the training ground.

Robinson explains: "We cross into different areas of the box, we have unopposed work, opposed work, we have players running across the goalkeepers and we look at all the different types of cross and corner routines that might come in.

"It's about repetition of practice and repetition of different scenarios, so that when the goalkeeper goes into the game, they've hopefully seen these scenarios and experienced it enough times that they recognise the cues quickly and to act quickly on that action."

Although Liverpool are likely to enjoy the majority of possession in matches, the high defensive line requires the goalkeeper to be ready to act at a moment's notice.

"I think that comes down to the character of the goalkeeper," Robinson says. "A lot of the work that we do as a team is about being in the right position and to get the focus on that.

"The way to do it is to obviously talk to your defenders, so communicating to them keeps you focused in the game.

"Being in the right position then allows you to make the right decision if the ball is played over the top. Having that concentration is down to your character.

"Understanding the game as well, 'OK, what's likely to happen if we've got the ball in this position and we lose it, where's the ball likely to go?'

"So reading the game and understanding where the ball is going to go is an important factor."