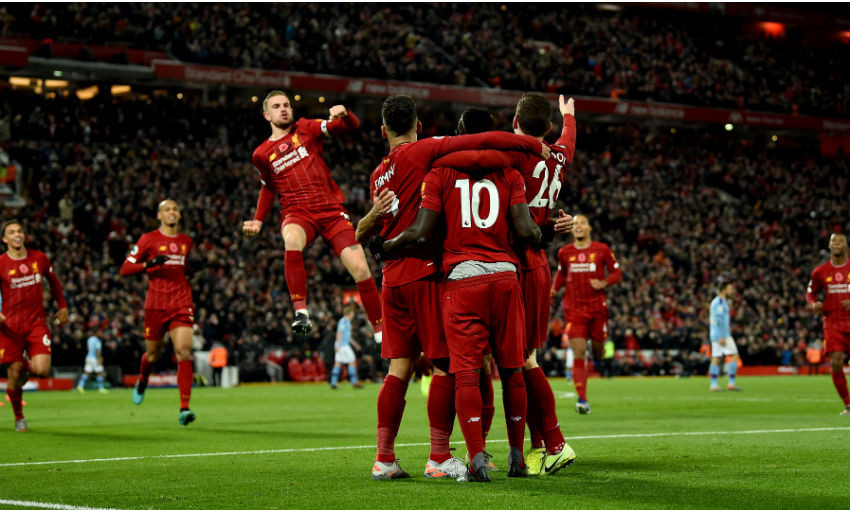 Trailing Aston Villa with 87 minutes of their 11th Premier League game of the season gone, Liverpool somehow conjured up a comeback and snatched a 2-1 victory.

Sadio Mane was front and centre as the No.10 first drifted in an inch-perfect cross for Andy Robertson to equalise with a thumping header, and then stooped bravely to glance home Trent Alexander-Arnold’s corner in the fourth minute of stoppage time.

A 10th top-flight win of the campaign preserved the Reds’ six-point lead at the top of the table ahead of a critical meeting with second-placed Manchester City eight days later.

Alexander-Arnold, meanwhile, became the fourth-youngest player in the club's history to reach the milestone of 100 appearances.

Before Pep Guardiola’s side visited Anfield, however, there was Champions League business to attend to. Goals from Georginio Wijnaldum and Alex Oxlade-Chamberlain saw off Genk in L4 to ensure the holders won their third-straight Group E match.

All eyes were then trained on City, with Liverpool duly producing an outstanding performance to best their closest rivals.

Fabinho’s long-range blast was added to by Mohamed Salah rounding off a wonderful team move as Jürgen Klopp’s team sped into a two-goal lead.

Another Mane header extended the advantage further in the early stages of the second half and rendered Bernardo Silva’s late strike a mere consolation.

Liverpool’s season resumed at Selhurst Park following the November international break - and, just as was the case three weeks earlier in Birmingham, another feat of escapology was required to secure all three points.

An 82nd-minute equaliser by Wilfried Zaha, which cancelled out Mane’s opener, looked set to snatch a draw for Crystal Palace.

Roberto Firmino, though, had other ideas and, just three minutes later, rammed home a winner from close range.

Dejan Lovren’s Kop-end leveller then earned a 1-1 draw with Napoli at Anfield; a game in which Fabinho sustained an ankle injury that would rule him out until mid-January. The result meant that the Reds needed to avoid defeat in Salzburg on matchday six to progress to the Champions League last 16.

And the month concluded with another 2-1 success in the Premier League, with Virgil van Dijk’s headed brace ultimately proving decisive against Brighton and Hove Albion.

Liverpool endured a nervy final 12 minutes or so after Alisson Becker was sent off and Lewis Dunk pulled a goal back immediately, but held firm to move 11 points clear at the summit.

Elsewhere in November, Klopp was inducted to the LMA's Hall of Fame in recognition of his 'historic achievements in football management to date'.