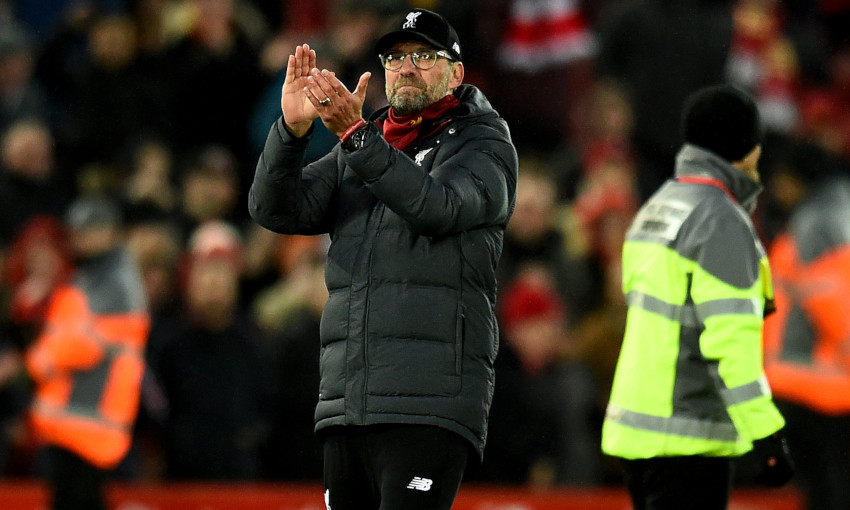 Jürgen Klopp wants Liverpool to get back on track by harnessing the collective power of Anfield when Bournemouth come to town on Saturday lunchtime.

The Reds resume Premier League duties with the Merseyside tie after back-to-back defeats on the road to Watford and Chelsea, with the latter coming in the FA Cup fifth round in midweek.

Should Liverpool prevail, they will set a new top-flight record of 22 consecutive home victories and extend their unbeaten sequence in L4 to 55 matches in the division.

In order to do so, Klopp feels the role of the supporters in the stands will be every bit as vital as those on the pitch.

Asked whether the effect Anfield has on his team is greater than he could have ever envisaged, the manager told his pre-match press conference: “Yes, it’s much bigger but I realised that already a while ago – the influence and impact of Anfield is much bigger than I’d thought.

“We’ve never really thought about statistics and stuff like this, and in this moment it doesn’t feel like we won the last 21 and that’s how defeats change things. We would never – and have never – ignored the things that have happened to us, result-wise, injury-wise, whatever.

“We have to create an atmosphere again tomorrow, we have to use the atmosphere then, but for that everybody needs to have the right mindset, our people as well. It’s a situation and not only we – as a team – lost three of the last four, our supporters lost them as well. [Now] it’s about the reaction – really fighting back with an atmosphere that is exceptional.

“We face an opponent in Bournemouth who have been fighting with all they have for the league for months already. They had a really tough period with a lot of injuries; not all of them, but now a lot of these boys are back, especially the front-line is now back [to] what usually, before the season, would be their front three, even if they played a different system before it.

“They are in a tough moment; we respect that and we wish Bournemouth and Eddie Howe all the best, but not in the game tomorrow.

“It’s not about records, it’s about making the probability as big as possible to win the next football match, that’s tomorrow and that’s what we prepare for. It’s what we want to show.”

With Manchester City not in action until Sunday afternoon, Liverpool can extend their lead at the Premier League summit to 25 points with a victory against Bournemouth.

Klopp feels his side will need to be ready to take some risk in their attacking play in order to break down the Cherries.

“I think everybody knows what we need: we need to play passes, we need to try things. If you try things and they don’t work out that’s all. Not all the time, it is not like this and it never was. If you win a game 4-0, it is not that each pass leads to a goalscoring opportunity – so that’s what I mean with mindset.

“The atmosphere will be as a good as possible, I am sure, I just mention it because I don’t want that anyone will forget it coincidentally.”

Liverpool’s next assignment following the conclusion of their meeting with Bournemouth will be attempting to overturn a one-goal deficit in the return of the Champions League last-16 tie with Atletico Madrid at Anfield on Wednesday night.

Reporters asked the boss whether a win over Eddie Howe’s side on Saturday would help re-establish some momentum before they resume their defence of the European Cup.

Klopp replied: “Look, you cannot hope for momentum – you have to work for momentum. That’s what we want to do. In the moment, we are completely focused on nothing else than the game tomorrow.

“After that we have three days, which is a comfortable space between two games, with Sunday, Monday and Tuesday for preparing for the Atletico game. Then we will try everything in that game. Momentum, you never have it for long, it’s there for a moment and then you have to work again and again for it. In some moments it feels easier, but it is never easy – it is always difficult.

“We want to win the game tomorrow anyway, so would be great if we can use it. We work to make it happen.”