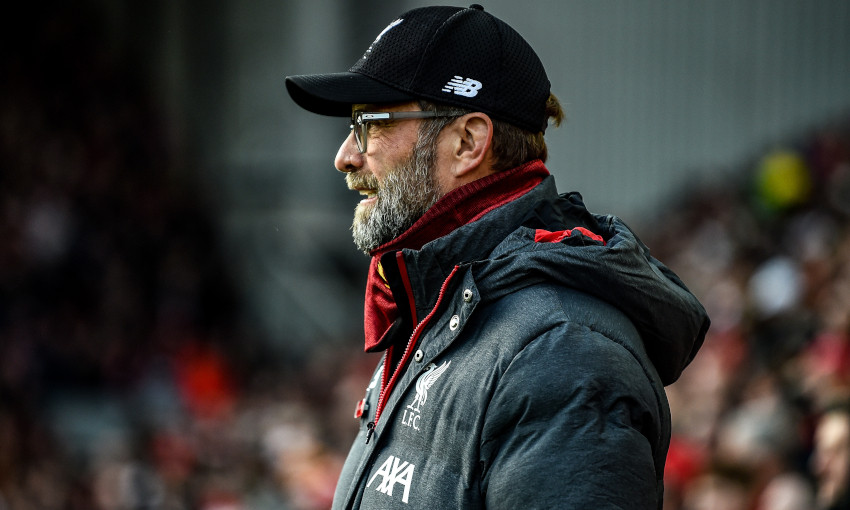 Jürgen Klopp insists Liverpool have to show how much Saturday's clash with Watford means to them as he anticipates a 'proper struggle' at Vicarage Road.

The Reds head south in search of a record-breaking 19th consecutive top-flight victory that would further boost their Premier League title pursuit.

But in his pre-match analysis of the Hornets, the boss detailed why Watford’s performance levels – and the experience of previous outings against Norwich City and West Ham United – show that the leaders must be at 100 per cent to win.

Read a summary from Klopp’s press conference below…

I didn’t know Nigel Pearson really well before he joined Watford. I heard about him obviously but we never worked together or played against each other. It’s a really interesting history that he has and I couldn’t respect more what he’s doing because it’s an exceptional job. When he started you could see immediately the impact he had. In the last four games they obviously had a results crisis, if you want, but not a performance crisis. They are really doing well still. They are well organised, have a clear plan, are aggressive, are a constant threat. You saw in the game against United, before they were 1-0 down they had the biggest chance of the game pretty much with Troy Deeney. Press high but defend well in a deep block as well. So that’s really interesting.

But it’s tough, it’s really tough, because you need each point you can get and that’s what they didn’t have in the last five games I think. But they will strike back 100 per cent. Home game, everybody expects Liverpool to come there and we are only asked about game No.19 [to win in a row] – that’s a wonderful situation for them to try to give us a proper struggle. We know that, that’s not the first time it happened. With Watford, weeks ago I thought, when I looked ahead, it would be one of the really tough ones. But I’m still looking forward to it. For us, it’s obviously a very important game as well and we have to show that. Then we will see.

I didn’t need that as a proof, but it is of course. That’s 100 per cent. You cannot imagine if you see Norwich playing or West Ham against us or Watford now that they are bottom of the table. You don’t feel it, you don’t see it really. There are some problems, for Watford probably it was at the start of the season – not a lot of points and you have to make the turnaround. West Ham, I don’t know exactly. Norwich played the whole season really good football between the two boxes, in the offensive box didn’t score often enough and defensively they conceded a few too much. That’s how football is. You can say really fair. But on the other side, really hard as well.

In this one game when you play against whoever, I always thought, even when my teams had not the quality of the other teams, there’s a massive chance for us and that’s what everybody sees as well. So, we have to be 100 per cent ready for these fights. That’s what I love most about my boys: that they are ready to fight. It’s not that when they realise in a game it’s not the clicking day that they lose their desire or whatever. It’s the other way around. Then we try it in a different way and try to find another way. That brought us in the position we are and that’s what we have to do again. Watford will be really tough, 100 per cent. Very physical and everybody will see how much it means to them, so we have to make sure everybody can see how much it means to us as well.

I thought actually in this game, especially when I watched it back, in this game in this specific day being 2-1 down helped us a little bit. Because the direction after that, a lot of things were different after that situation. Yes, we made a change as well. It was the 54th minute or so when we conceded a goal, so it’s clear the game is not over, it’s nothing to do with our situation, there are many more minutes to come where you can do things better and different.

I didn’t know it was the first time since Aston Villa [that Liverpool had trailed in a league game]. I don’t need that really often, to be honest, but now we had it. The boys reacted well and that’s the only thing we have to know. It doesn’t mean we want to go one goal down now all the time to get started. It was just the situation on that day. I know some people probably used the word complacency, that they saw glimpses of that. I didn’t see that at all. It’s a long season and concentration level can drop from time to time – for us, for other teams, in games, between games. How much the boys fight then for a result is just exceptional. No, no fear about anything. But we don’t take it for granted that we’ll be one or two goals up.

This game will be tough. I said it, 100 per cent, you will see it. I don’t want to say it and then we will win there 6-0 – it will not happen. We just have to fight for each inch of grass in that game again and if we do that, we are difficult to play. If we are difficult to play, we have a chance to win. If we have a chance to win, we should use it.