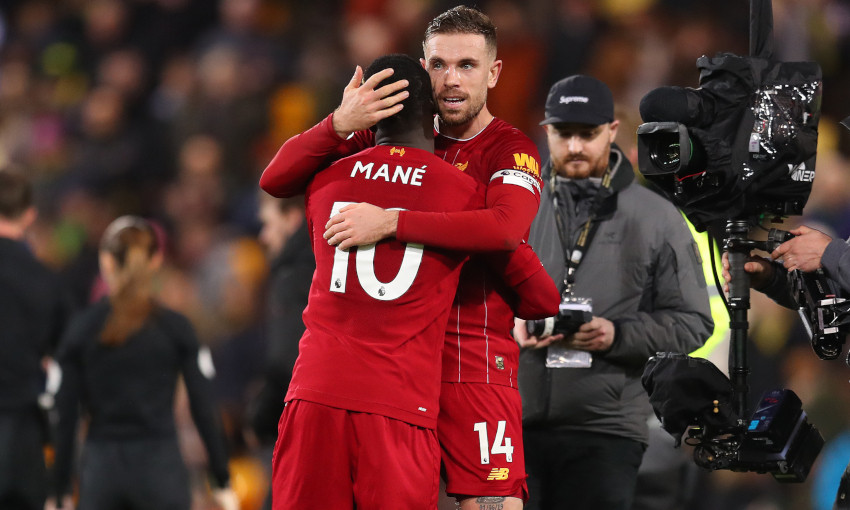 Jordan Henderson hailed the 'fantastic' instincts of Sadio Mane that earned Liverpool a 1-0 victory at Norwich City on Saturday.

The Reds increased their advantage at the top of the Premier League to 25 points with a hard-fought success at Carrow Road.

Mane was the match-winner on his return from injury, the Senegalese forward making full use of an assist from Henderson on 78 minutes to decide the contest.

Having brought the ball under his control at a height, he adeptly shifted his body to plant an unstoppable left-footed finish between the near post and the goalkeeper’s reach.

“It was a fantastic run from Sadio, great touch and a great finish – fantastic goal from him,” Henderson told Liverpoolfc.com after the final whistle.

“It was pretty hard-fought. We had to go right until the end, of course, but that’s Premier League football.

“Norwich City are a good team and have caused teams a lot of problems throughout the season and got some good players, so we knew it would be difficult.

“It was difficult conditions for both teams in the end but, overall, I think we’ve got to be delighted with the three points.”

Good to be back after the break! Big 3 points! #YNWA

Liverpool’s 25th win in 26 Premier League outings this term had no influence on Henderson’s insistence that his team does not look beyond the next challenge, not least with a Champions League tie against Atletico Madrid just three days away.

“We just focus on the next game,” said the captain.

“Everybody is bored of us [saying that], I know, but that’s the way we have approached it for a long time and there’s no need to change.

“We’ve got to recover quickly, we’ve got another big game in midweek against Atletico Madrid which will be another tough test, so we’ve just got to go there and do everything we can to get a good result.”