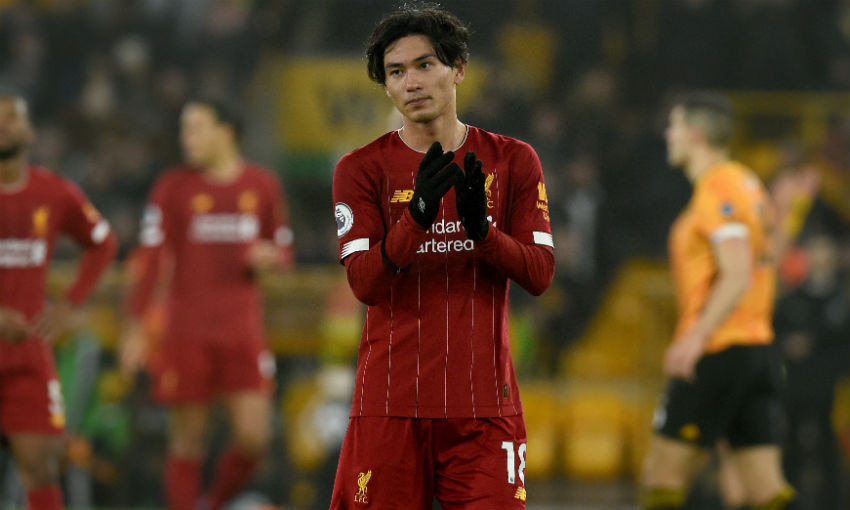 Takumi Minamino will draw plenty of worthwhile experience from his introduction to life in the Premier League, Jürgen Klopp believes.

Minamino made his top-flight bow in Thursday's 2-1 win at Wolverhampton Wanderers as he replaced the injured Sadio Mane in the 33rd minute.

In addition to his talent and the versatility he brings to Liverpool, Klopp was also impressed with the mental toughness the No.18 displayed in trying circumstances at Molineux.

That was a very significant game for me. It was a difficult game, but we could win! I will keep on fighting till the end!!

On whether the Japan international will feature on the weekend at Shrewsbury Town in the FA Cup, the boss told a press conference: "With Taki we have to think about what we do exactly now because yesterday he played much longer than we thought.

"But yesterday night was a big step for him. For nobody yesterday on the pitch was it a game like where you have to shine and make your best game ever and stuff like this.

"When you come in as a new player in this kind of a battle and then showing up like he did, not with his skills – what he obviously has in different departments of the game – [but] with his mentality and character.

"He was fighting like crazy and closed gaps, was involved in a lot of situations. That was just a super start, to be honest.

"Is it his 100 per cent position? Yes, he can play that. How I said, he's pretty versatile so he can play different positions. For yesterday night, it was exactly what he had to do and he did it. That was much more important than the next game.

"I have to see how he reacted now on the intensity of that game – I don't know him long enough in this part, so we have to see. But each game helps for sure."

Minamino now has two appearances for Liverpool to his name after arriving from Austrian side Salzburg at the start of the month.

His manager is already impressed by his start to life on Merseyside, but feels there's plenty more to come.

"You saw so many things of his ability last night. This game last night was a proper fight and he was completely ready for that.

"For him, [it's] still kind of a new environment with a new team and then really adapting. From a tactical point of view, it was an outstanding game. That's what we see in training.

"In training then we see, of course, more of all the finishing stuff, the creating stuff. It's just the player we wanted and now he's ours."