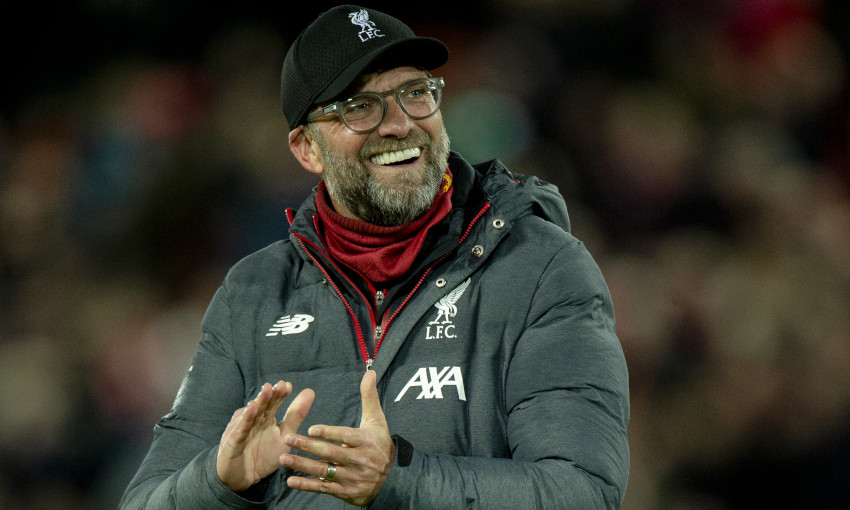 Jürgen Klopp told his team to be proud of a 'sensationally good performance' that earned a place in the Emirates FA Cup fourth round with a 1-0 win over Everton on Sunday.

The manager made nine changes to his starting line-up – including Liverpool debuts for Takumi Minamino and Nathaniel Phillips – and then lost James Milner to an early muscle injury, prompting the introduction of Yasser Larouci for his first senior appearance too.

But a resolute, assured display was rewarded when Curtis Jones picked out the top corner with a sublime curler in the second half that was enough to defeat the Blues.

At his post-match press conference, Klopp revealed the mixture of enjoyment and pride he felt watching a youthful side step up to the stage. Read a summary below…

Let’s start with the negative things. Two players started the last game, one of them got injured. That’s the situation we are in, that’s why a lot of managers make a lot of changes. It’s nothing to do with the cup, it’s the timing.

All the rest of the night was absolutely perfect, I have to say. I saw a sensationally good performance of a not-very-experienced team with a lot of players for them the first time playing on this kind of stage, in front of this crowd, against the opponent. It was outstanding, I loved it, I loved each second of this game. It was a bit too wild in the first half, that’s completely normal; if you try to show respect to our principles, it can happen that it gets a bit wild. But, football-wise in a lot of moments brilliant. Defensive-wise, organisation-wise, the press, the counter-press, absolutely incredible. And then we scored this goal. 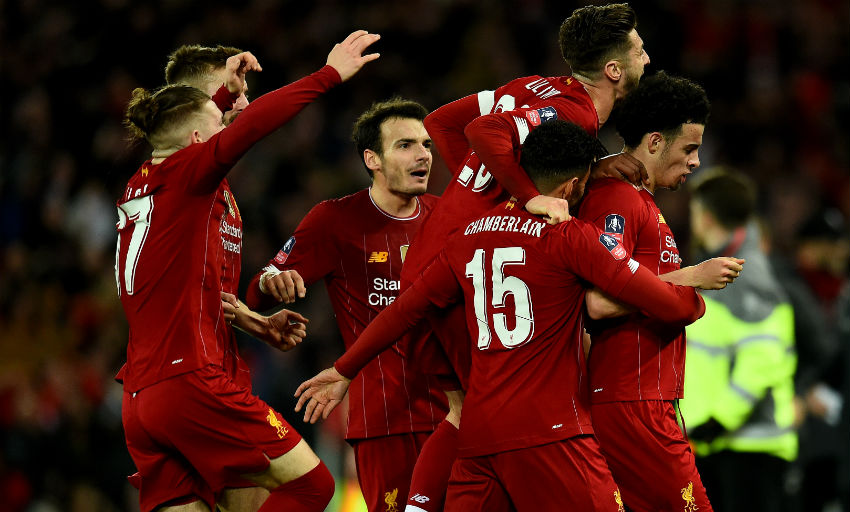 That they had three big chances, we know that – Adrian, class, absolutely class – and then we scored that goal. We controlled it in a lot of moments, even the chances they had we were not outplayed, we lost the ball or played a bad pass; that can happen, it’s not cool but it can happen. That’s why the formation was that wide. I just liked it, each individual performance was outstanding.

Absolutely, I love it. I must say one thing, because everybody asks me about Curtis Jones but there were so many extremely good performances tonight. The goal was exceptional and the boy is an outstanding player. But I cannot understand why nobody asked me so far about Pedro Chirivella, Neco Williams or Yasser Larouci. Is this a sign we want to give the boys? You have to score, otherwise we ignore you?

Let me speak about Curtis – an unbelievable player, Scouser, very confident, can’t wait to play in the first team. Good, rightly so. He is in a very good way. I’ve known him three-and-a-half years, he made big steps, will be a Liverpool player if nothing strange happens, 100 per cent. Great. That he scores that goal, I’m not surprised. That he scores this kind of goal, I’m not surprised. He is for these situations and still a lot to learn and improve. But sometimes we forget it as well in training, he is 18. Unbelievable. In Germany, because of a different system, he would still play one year 100 per cent in the youth team and nowhere else. Here, he is around the first team. I like that the boys used all our patterns tonight to cause Everton problems. It was brilliant, absolutely brilliant. 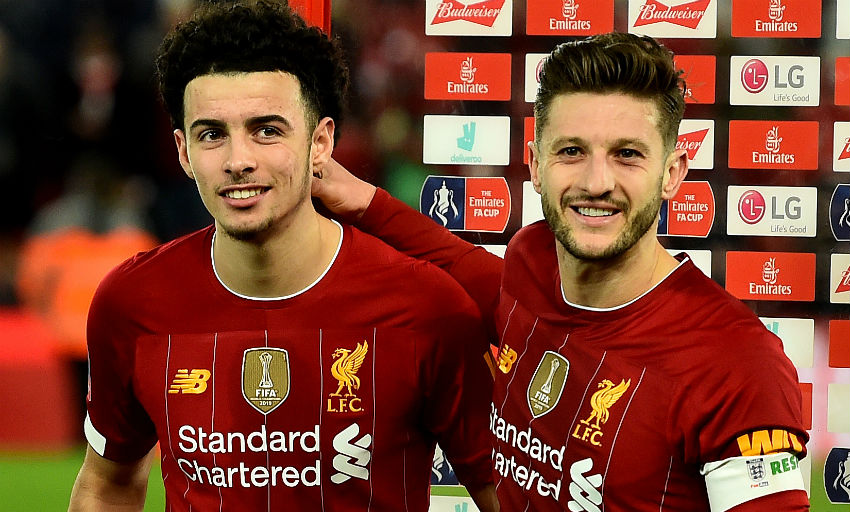 On the influence of the atmosphere at Anfield…

It was an exceptional atmosphere tonight, but if this game wouldn’t have a good atmosphere, I would have had something to say about it, to be honest! But that was exceptional tonight, of course. We never get used to it, we never take it for granted, absolutely sensational. I would love to see a few people and ask them what they thought exactly about the line-up and all these bad things about me and the FA Cup and ‘no respect’ and stuff like this – and then after the game. I enjoyed each second. It was a bit like the Arsenal game [in the League Cup], I enjoyed it so much. We didn’t concede as many goals, thank God, but a couple of things were similar.

It’s a very important message: if you want to be a Liverpool player, you have to respect the principles of this club. We cannot always play the best football in the world but we can fight like nobody else if we want. And as long as we use our principles, we will be a difficult opponent to play against. Pretty much the same is for our crowd; if you want to be a Liverpool supporter, you don’t have to perform always on the highest level but you have to fight with all you have, that means you have to shout as loud as you can. And that’s what we did now three times [in a row at home], really happy about that. That’s exactly what we have to do if we want to have something at the end of the season. 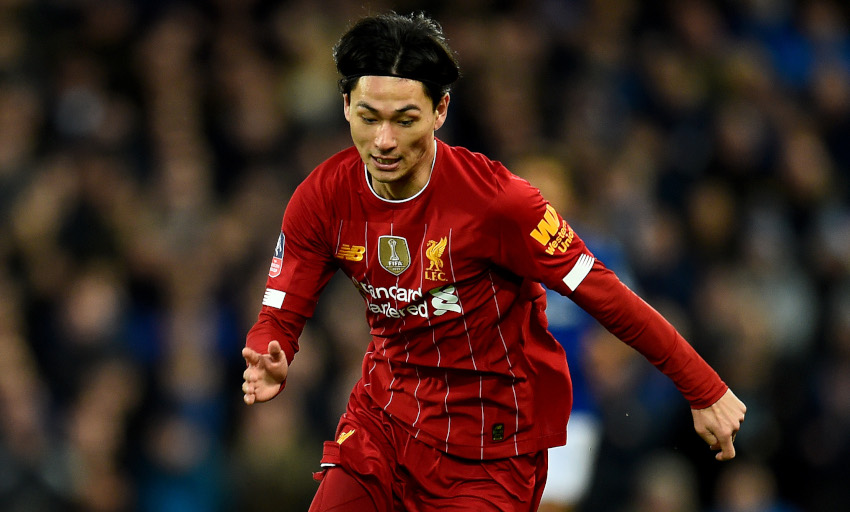 The Aston Villa game, in the moment when we had all these injuries we had to take these boys with us, otherwise they would have played there. Neco and Curtis were with us – Harvey played – and they would have played. Pedro played and in the first half against Aston Villa was probably the best player on the pitch, we watched it on television in Qatar and we were completely over the moon about what we saw there. It was very important. It’s important we can give these opportunities.

We tell the boys constantly it’s important not all of them go with the first impulse on loan because there is something to learn here as well. Tonight we saw really that these boys come closer and closer and closer to be ready for us, and I’m really happy about that. It’s so, so important that they learn how we play; it’s important they get games and stuff like this, but it’s important they know as well how we play. I saw that tonight and that made me really proud, and I told the boys they have to be proud of that performance tonight, it was exceptional.