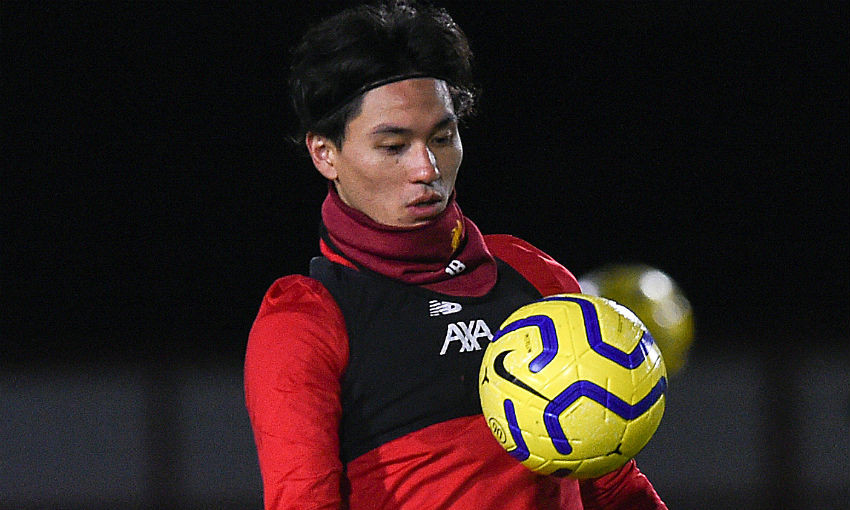 The Japan international officially became a Reds player on January 1 and Jürgen Klopp is considering the prospect of selecting the former Salzburg man for the Merseyside derby at Anfield.

“Takumi is here and had three sessions with the team now, that’s not so much. But it’s football still,” the boss said on Friday.

As of his press conference on Friday, Klopp was awaiting the results of the scan undergone by Naby Keita to determine the extent of the groin injury he sustained during the warm-up for Thursday’s win over Sheffield United.

The No.8 will not play against Everton, but Klopp plans to include Rhian Brewster in his squad after the striker returned to training following an ankle issue.

Klopp indicated that the condition of his players after the victory against Sheffield United will inform his decision on how many changes to make to Liverpool’s line-up.

He stated: “How can I rotate? A little bit. We will see. For us it’s the day after the game, so we are still assessing the boys, how they feel, how they reacted on the game last night, which was an intense one.

“The boys played an incredible game, that was only possible because we invested a lot, were dominant, ran a lot, all that stuff, so we have to see. I couldn’t make a line-up in this moment even if I wanted to and that’s the thing… we have to make sensible decisions obviously about these things.”

For Everton, Carlo Ancelotti explained that Bernard and Fabian Delph (both knee) will undergo fitness checks ahead of the match, but Morgan Schneiderlin is set to be available.

“Bernard, we will check today in training. Schneiderlin trained with us and I think he is available to play. We had a problem with Fabian Delph, with his knee. He had a scan yesterday, it seems good but we will see today,” Everton’s manager told the media on Friday.

“The other players are OK, a little bit tired but that’s normal. We have time, we have two days again, so we can recover and prepare well for the game.”

Alex Iwobi (hamstring) is out for the visitors, along with long-term absentees Andre Gomes and Jean-Philippe Gbamin.