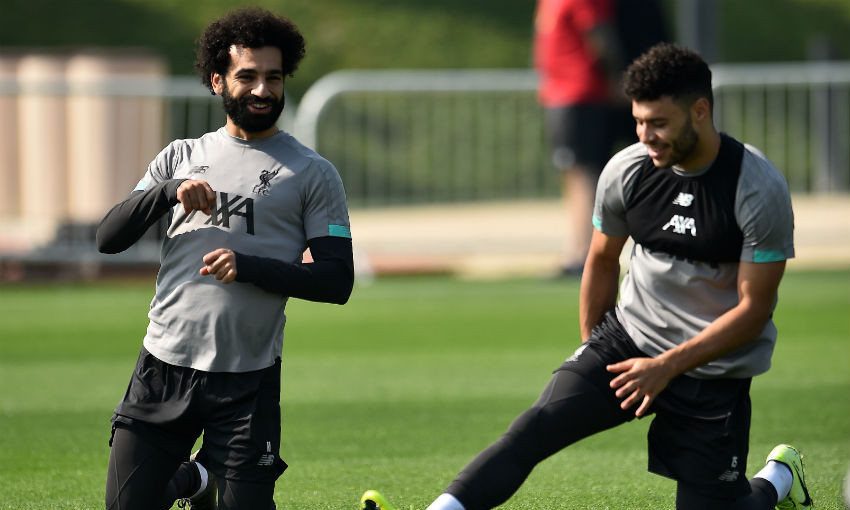 Every one of Salah's touches during Wednesday's semi-final against Monterrey in Qatar was met with loud cheers, with the forward believing afterwards the whole stadium 'was Egyptian'.

Another warm reception at Khalifa International Stadium awaits the No.11 on Saturday as the Reds take on Brazilian side Flamengo to determine who will be crowned 2019 world champions.

Asked about Salah's fanfare in Doha, Oxlade-Chamberlain told Liverpoolfc.com: "It is incredible... it's well deserved obviously.

"It's nice to see every time they call his name. I have a little cheeky look over and see what he's doing. He's trying to keep a little smile in, but I can see inside it makes him really happy and proud.

"He deserves it, he's come from Egypt and worked his way up to the top. He's a humble guy, a very good teammate and such a top professional.

"The numbers that he's doing on the pitch week in, week out for years now is incredible. He deserves everything he's getting at the minute.

"I hope he can put on a good show for them and the Mo mania can continue because that'll be a good thing for all of us."

Oxlade-Chamberlain and his teammates are looking to become the first side in Liverpool's illustrious history to lift the Club World Cup.

And the 26-year-old is determined to make the most of an opportunity that doesn't come around so often.

He continued: "It's not something we're so familiar with in our country and I think it's a rare occasion to win the Champions League, it doesn't happen all the time. It's a big thing for us.

"The Brazilian boys have told us how big it is back there. I think Internacional beat Barcelona years ago, Alisson was telling me, and it was massive then. It'll be the same for Flamengo.

"We know how big it is and how big of an achievement it is. We're here and there's only one thing we want to do – we want to win.

"One game away, we know what we need to do and it'll be really nice to get that one."

With Liverpool continuing to compete on multiple fronts this term, Oxlade-Chamberlain feels the strength in depth the Reds possess is showing as 2020 approaches.

The No.15 puts that down to quality and the willingness of every member within the squad to give everything in the search for more honours.

"I think when the boys are fresh just off the back of a pre-season, then the games aren't as thick as they are right now," he added. "Maybe for some people it's a bit hard to see how involved they will be.

"But I think in the last month or two months, the changes that he's been making, we've all been required to chip in and play our part.

"Everyone has done fantastic – whether they're more regular starters or they've come in and played minutes.

"The Everton game was a big example of that. Everyone that came in was really good on that day and it's been like that in every game when there's been changes made.

"With the level that we play, the style of football that we play and intensity, you're going to need fresh legs at some point. We've done that really well so far. We always talk about how it's a team game, it's a team achievement, but it really is.

"There's times where certain boys will be feeling a little bit tired or they need a rest and other boys are going to be needed.

"At the same time, if you come in and do well, the manager doesn't turn a blind eye to that and you get opportunities.

"We're all in it together and everyone's required to do their bit to help push the team forward."