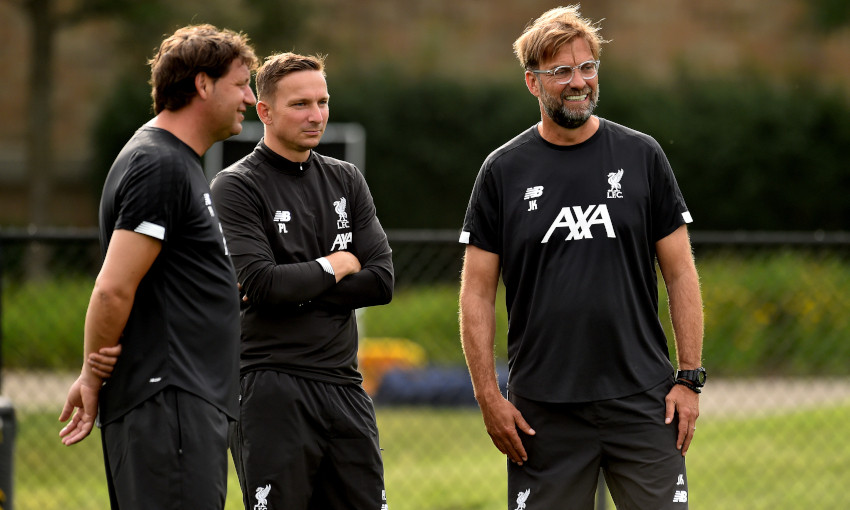 The coaches follow Jürgen Klopp in committing their futures to the Reds until 2024 today, helping to continue to shape the long-term development of the club well into the next decade.

Krawietz arrived at Anfield with Klopp in October 2015 having worked with the manager at FSV Mainz 05 and Borussia Dortmund.

Lijnders, meanwhile, joined Liverpool’s Academy from FC Porto in 2014 before progressing into the first-team set-up at Melwood. He briefly departed Merseyside for a spell in charge of Nijmegen in his native Netherlands before returning in the summer of 2018 as joint-assistant manager.

“It was so important to me that my staff also agreed these new deals with the club,” Klopp said. “Without them being prepared to make the same commitment, quite frankly I would not have been able to do this.

“I am blessed to be surrounded by so many amazing staff; honestly, I feel the luckiest manager in the world in this regard.

“Peter and Pep have contributed just as much as I have to the development of this team and although as the manager, many may see me as the face of the club, their input and expertise is invaluable to what we’re looking to achieve.

“I have worked with Pete for many years now, going back to my time at Mainz and Dortmund. And even now I am still amazed at the things he spots during a game. He has an incredible talent and one that is priceless for us.

“It has been one of the best professional experiences for me to see him grow and become the coach he now is. He’s always been essential to me, but his own personal development since arriving at Liverpool has been outstanding. He is so smart, so insightful and so important to us.

“Pep, what can I say? What this guy doesn’t know about football isn’t worth knowing! I have never met a guy more passionate and dedicated about the game.

“I only got to know him when I first arrived at Liverpool, but I instantly fell in love with his infectious commitment and knowledge of the game. He left for a period and came back – but he came back in a more senior capacity and he’s flourished since. He is every inch a top manager of the future, but in the meantime, I am thankful we have him with us.

“But going beyond Pete and Pep, these new deals are a mark of not only our collective belief in our project, but also a sign of our development so far.

“We always say it is a collective effort at Melwood; it’s not just about me, the players or my coaching team, everybody who works here contributes in their own way to what happens on the field and how we have progressed as a club – that’s why we have everybody’s names on a wall in a corridor here.

“And that’s why today is such an exciting day for myself, Pete and Pep and why I am delighted they will be alongside me for the journey still to come.

“Both view this decision to extend exactly as I do: a fantastic opportunity to do what we all love at the best place in the world we could do it.”