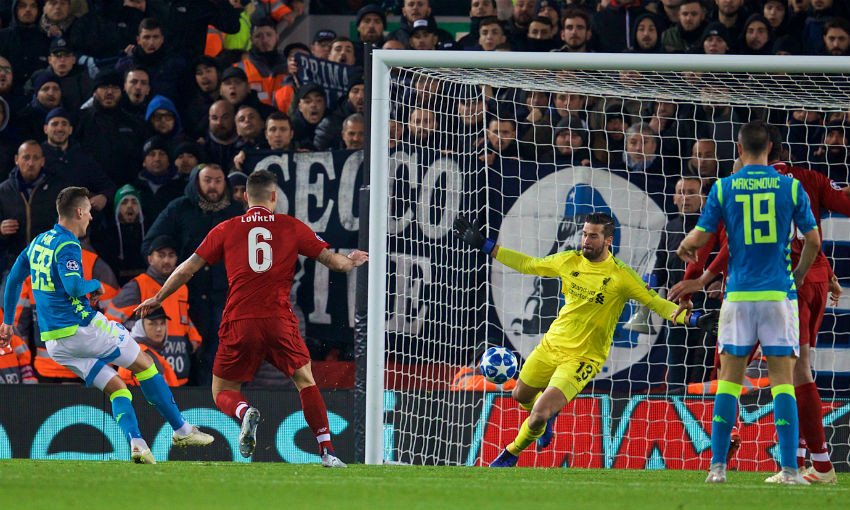 Alisson Becker continues to hold immense pride about his historic intervention against Napoli in the Champions League last season.

The Brazilian denied Arkadiusz Milik in the 92nd minute at Anfield last December to secure a 1-0 victory in matchday six for the Reds and confirm their passage to the last 16.

After winning the competition in June, Jürgen Klopp's side were paired with the Serie A outfit in the pools once again - an opponent in which Alisson has fond memories of.

“They are part of the story of my career," the goalkeeper told The Independent.

"In March 2018, Roma had an away game in Naples and it was an awesome one for me as I made 11 saves in a big defensive performance, which is really important against Napoli.

“And then, here at Anfield, I think I put my name in the history of Liverpool with the save against them in a decisive match, an all-or-nothing moment, with our Champions League lives on the line.

Asked what he was thinking in that exact moment, Alisson continued: “If we concede now, there is no time to do a comeback, which we are specialists at. This is it. Everything depends on this. I trained for that kind of moment all my life.

“I was ready. I got into the right position and then I was waiting for my defenders to clear the ball, but it was a difficult cross to keep out and then I saw the ball fall to Milik.

“I tried to close the angle as much as I could, make myself big and I forced him to stop and shoot quickly. I think if you ask forwards, they’ll say this is the hardest thing to deal with in that situation.

“Then the ball came straight to me, but that’s because I attacked it, I bought time, I made the situation complicated for him. If I had stayed in position, he would have had space and time to look and choose his spot.”