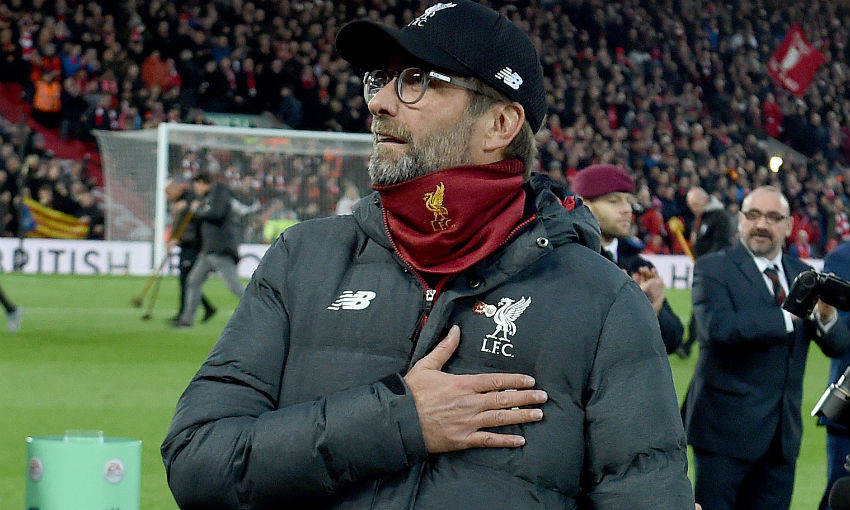 Jürgen Klopp took extra satisfaction from Liverpool’s victory over Manchester City because they achieved it by ‘doing it our way’.

The Reds opened up an eight-point lead at the top of the Premier League table after goals from Fabinho, Mohamed Salah and Sadio Mane secured a win against the reigning champions at Anfield on Sunday.

And asked by Liverpoolfc.com whether he was pleased with the courage shown by his players, Klopp replied: “That was the plan and that was the idea and it’s pretty much the only way we can do it.

“You saw in the last 15 minutes when City gets control of the game then it’s like it is. Difficult but OK, we were obviously tired then and a couple of players felt a little bit of cold. Hendo, Bobby half-time, it was really difficult. It was clear at one point we had to make changes there then it’s difficult to adapt.

“Then they get the momentum in the situation when we want to change, scored the goal and had a few more moments.

“But come on, you cannot win against City with no dangerous moments or whatever. Their quality is too high, it’s too big, so I’m completely fine with what we did because we did it our way and I liked that a lot.”

Inside Anfield | The unseen story of LFC 3-1 MCFC

In beating City, Liverpool extended their advantage over Pep Guardiola’s side to nine points heading into the international break.

Nevertheless, with around two-thirds of the Premier League season to go, Klopp isn’t interested in thinking any further ahead than the Reds’ next outing – at Crystal Palace on November 23.

“It’s just the start, that’s how it is, everybody knows that,” stated the boss.

“If you would have told me that you can have 34 points [at this stage of the season], wow! It’s pretty much impossible but we did it but now the boys go for the last international break of the year. They have to come back healthy. You saw it how intense it was [against City].

“Hopefully they all come back healthy and then we go to Crystal Palace. I think the last games are somewhere on the planet on Tuesday in the week that we play on Saturday against Crystal Palace.

“So they will fly back on the Wednesday, Thursday have a recovery session and Friday, Saturday ‘Hello, Crystal Palace!’ That’s the situation so nothing happens so far but it’s still the best situation we could have asked for so let’s hope we can carry on.”