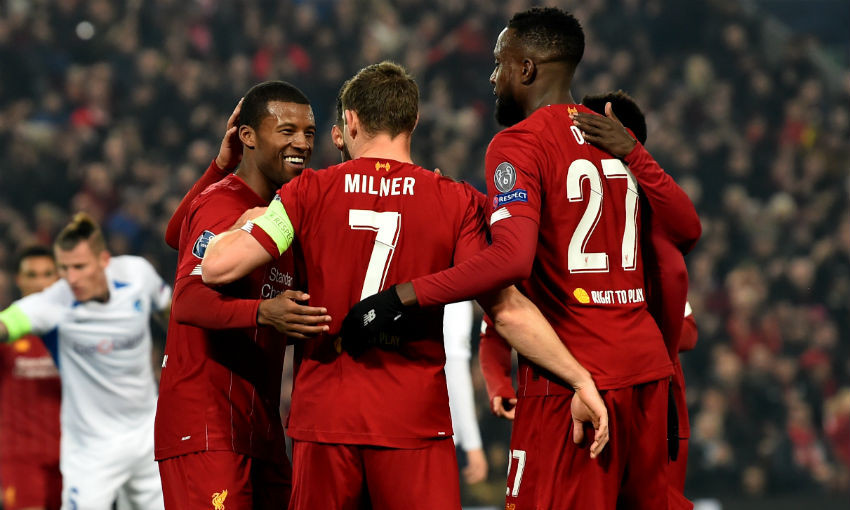 Georginio Wijnaldum views Liverpool's win over Genk to move top of their Champions League pool as an 'important' step, but refuses to think the job is done.

The Reds took down the Belgian champions on Tuesday night through Alex Oxlade-Chamberlain's second-half strike after Wijnaldum's opener was cancelled out five minutes before half-time.

The result, and Napoli's draw at home to Salzburg, sees Jürgen Klopp's side sit one point clear atop Group E after four rounds of matches.

"It's a good result but we still have two games to play," Wijnaldum told Liverpoolfc.com post-match. "I think we have to look game by game and then at the end we will see how far we come.

"We didn't expect anything different, we expected what happened. Of course, we helped them get comfortable in the game with the goal they scored. We didn't do everything right and they could play their game but we expect every game we play this season to be hard. We don't have easy games.

"Today not everything was right but we had to fight until the end and in the end we had the three points."

Wijnaldum broke the deadlock at Anfield in the 14th minute when he pounced on a loose ball inside the Genk penalty area.

But after lifting the ball into the roof of the net from close range, the No.5's celebrations were somewhat subdued.

"I thought it was offside!" he continued. "It's a cross and I think it hits the back of a defender and it came in front of me and with my outside foot I shoot it in.

"I didn't celebrate immediately because you know with the VAR these days you celebrate and you didn't score.

"I was waiting but in the end it was a goal! It's always tricky when you celebrate and hear it's not a goal."