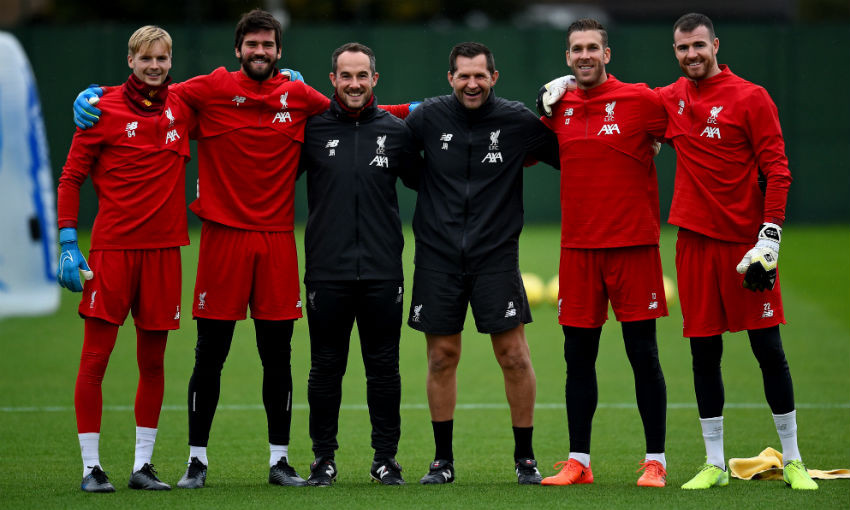 Jordan Henderson believes the togetherness and competitive attitude of Liverpool's first-team goalkeepers translates with high levels of performances on the pitch.

Alisson Becker, the Best FIFA Men's Goalkeeper for 2019, is now back between the sticks after his calf injury, with summer signing Adrian impressively deputising during the Brazilian's absence.

Behind the duo are Andy Lonergan and 20-year-old Caoimhin Kelleher, who is set to start tonight's Carabao Cup fourth-round encounter with Arsenal.

Also accounting for the work of coaches John Achterberg and Jack Robinson, Henderson insists Melwood is clearly well-stocked with safe pairs of hands.

In his column in the official matchday programme, the captain wrote: "It's been great to see Alisson Becker return to the side so seamlessly and without drama. Massive credit must go to the big man for that.

"We all know how important Ali was for us last season in all competitions and that's been reflected in the recognition he's received over the course of this year. It's all well deserved and everyone at Melwood – and I am sure among our fanbase – is delighted for him.

"But Ali would be the first to tell you that 'keepers are a 'team within the team' and the contribution of the others is absolutely critical to maintaining high standards. Without those around him, Ali, I'm sure, would say he wouldn't be able to perform at the elite level he does so consistently.

"When we said goodbye and good luck to Simon Mignolet in August it was pretty clear whoever came in had a tough act to follow. But Adrian has been absolutely amazing for us – on and off the field. They were big shoes to fill, but he's filled them and then some.

"Even leaving aside the match-winning performances on the pitch, in the dressing room it feels like he's never been anywhere else but with us. His personality reflects how he plays: positive, brave, alert, team first and individual second. Just like Simon, he's every inch a No.1 and as outfield players it's huge to know we have someone like him in our squad."

Henderson continued: "Another summer addition in the 'keeping department that maybe went under the radar was Andy Lonergan, but again he's been brilliant for us. 'Lonners' initially came as a training 'keeper to help us out in pre-season but settled instantly. His performances in the USA were top-drawer, but in training he's kept us as outfield players on our toes.

"The lads were absolutely made up when that short-term deal was made into a season-long one. He brings a lot to the dressing room and to the training pitch. Again, like Adrian, his personality is perfect for what we need in our group. He's a brilliant professional who does everything right and has the experience to contribute with advice when it's needed. Lonners is a top 'keeper as well, I'm buzzing he's with us.

"Someone who is not a new addition, Caoimhin Kelleher, has kicked on again and is showing great signs of progression. He's clearly a big talent and we were all buzzing when he made his debut for us at MK Dons and pulled off some absolute worldie saves on the night.

"He's lucky to have the likes of Ali, Ads and Lonners in and among him each and every session – as well as John Achterberg and Jack Robinson as coaches. But as with any pro having great people around you is one thing – you still have to be good enough and work hard enough. Caoimhin definitely ticks every box and you can see he's going to have a fantastic career."