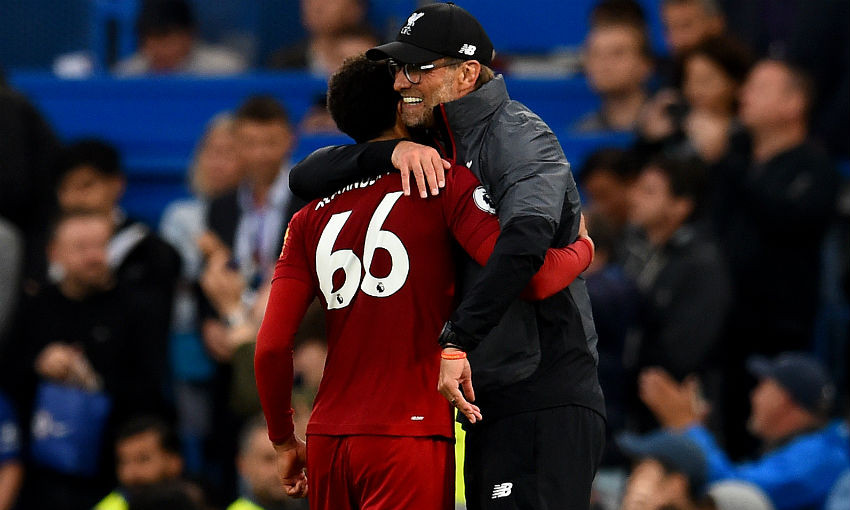 Trent Alexander-Arnold has stressed he'll be forever thankful to Jürgen Klopp for the faith and opportunities given to him.

Alexander-Arnold is three appearances shy of a century of first-team outings for Liverpool, having made his debut in October 2016.

The No.66 is already a Champions League winner and fully-fledged England international as he celebrated his 21st birthday on Monday.

Such feats, he believes, wouldn't have been possible without the guidance and support from his club manager.

Asked what Klopp had done for his career, the full-back replied: "Everything really.

"Obviously without him who knows what would’ve happened. He’s the one that’s given me the most opportunities, more than I can even ask for.

“He’s obviously put a lot of trust and faith in me personally and I’ve tried to repay him every time he’s done that. Obviously a massive thanks to him and hopefully there will be four more years of success.

"Within his first few weeks, he was down at the Academy watching the young lads. That almost gave us a bit more faith and gave a statement to the club that he is going to use young players and give us them chances.

"He's shown over the four-year period that he has given them young players the chances and given opportunities - and obviously I'm one of those youngsters that have been given them."

Alexander-Arnold admits it's been difficult to fully soak up his incredible journey of joining the Reds at the age of six and then going on to become a European champion.

“The last few years have been a whirlwind, it’s all gone so quickly," he added. "To be able to sit back and think about how far I've come is massive.

"I never expected things to go so well, but I’ve been blessed enough and lucky enough to be given the opportunities by the right managers at the right times.

“It’s the same as if you haven’t won a trophy. You want to do more, that determination and hunger to win silverware never dies out.

“No matter how many you win, it’ll never be enough for you. You need to keep pushing to get better as a player and as a team. Whatever you're playing for, the aim is always to win, that’s the mentality we've got at the minute.”