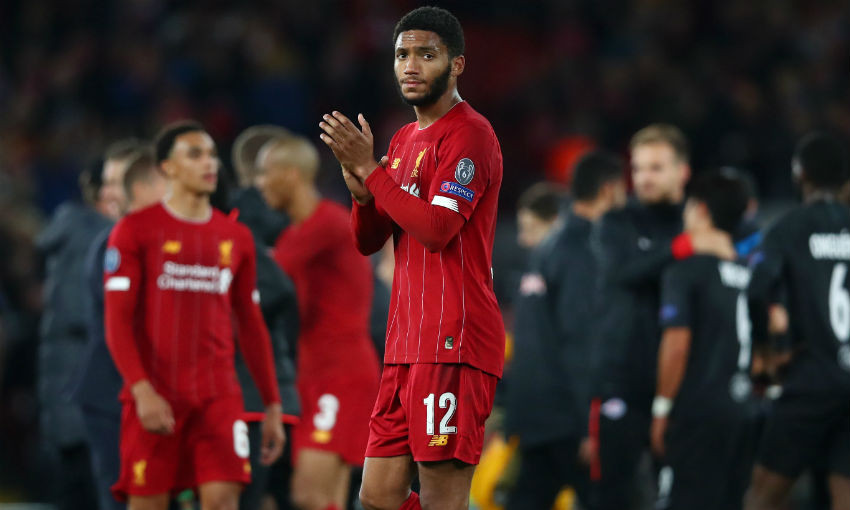 Jürgen Klopp was happy with Joe Gomez's performance against Salzburg in the Champions League in midweek when he replaced the injured Joel Matip.

The 22-year-old made his fifth start of the season in the thrilling Group E encounter at Anfield on Wednesday night that ended 4-3 in favour of the European champions.

The Reds raced into a three-goal lead after 35 minutes but were pegged back by the hour mark - before Mohamed Salah's finish settled the tie.

Speaking about Gomez at a press conference to preview Saturday's Premier League clash with Leicester City, the boss said: "It would be really not fair to make Joe responsible for the goals we conceded, that was not the case.

"That players who didn't play together for a while need a bit of time to get used to each other again, that's completely normal.

"What makes this game especially difficult was the fact that how Salzburg defended. Each ball they won, there were not a lot in the first half an hour, but all balls were directly in behind the line and the runs they do are really good.

"In these situations, Joe did outstandingly well because of his speed, the challenges he had. The goals we conceded later were for different reasons."

Klopp explained how the Austrian champions found joy in the final third at Anfield as a result of Liverpool conceding possession, rather than individual errors at the back.

He continued: "We lost the ball in a situation. So losing a ball is always difficult but it's always a challenge you face in a football game.

"But then you should lose it in the right moment because then you still have kind of a formation behind that. If everybody is expecting that we keep the ball and pass it through, then you are wide as a formation and then you can come in situations where the opponent can score.

"That happened, I think, at least two times in that game. That, in the first place, has nothing to do with the centre-halves, they are always the last ones who face the challenge. But usually we have to sort that early.

"So, I was fine with his performance and it helps, of course, getting minutes, it's always good. That's a challenge having not the best rhythm then maybe you need minutes but he had them, so all good."