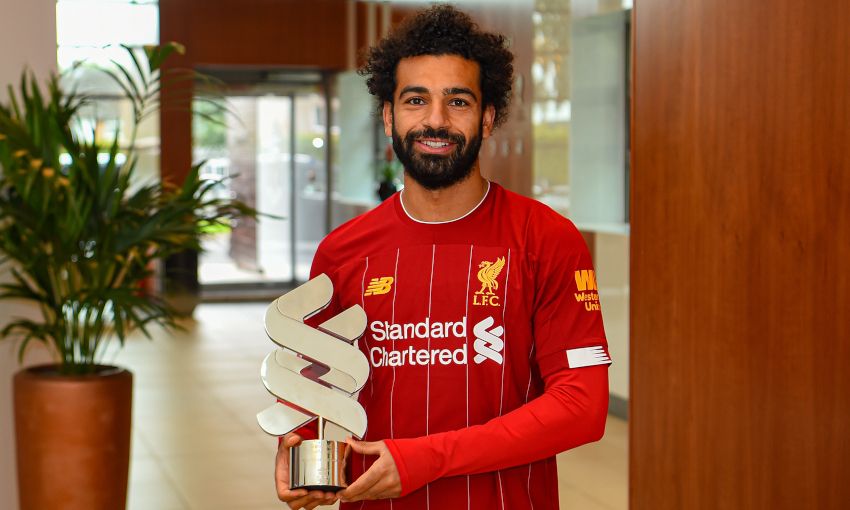 Mohamed Salah today collected the first Standard Chartered Player of the Month award of the 2019-20 season.

The Egyptian was voted Liverpool’s star man in August after three goals and two assists in six appearances in all competitions.

Salah scored one and created another when the Reds opened their Premier League campaign with a 4-1 win over Norwich City at Anfield.

He then helped Jürgen Klopp’s side clinch the UEFA Super Cup, coolly scoring in the penalty shootout with Chelsea in Istanbul.

The No.11 featured in each of the subsequent Premier League victories against Southampton, Arsenal – in which he converted a spot-kick and produced a sublime individual goal – and Burnley, where he teed up his side’s third goal.

Salah edged out fellow forwards Roberto Firmino and Sadio Mane in our Standard Chartered Player of the Month poll here on Liverpoolfc.com.

“I am happy to win the award, but the most important thing as I’ve said before is winning games,” he said upon receiving the trophy at Melwood on Thursday. “We won all of our games last month in the league, we had good results, so we need to keep focused on our games and keep winning.

“We had a good month. We won a trophy in that time, so it was something unbelievable for us as a team. Everyone showed with our performances and the way we can play, so we’re happy about what we have right now.”

One of Salah’s highlights from the month was that aforementioned stunning solo effort against Arsenal.

The Egyptian sped beyond Gunners defender David Luiz on the right touchline before making his way into the area and coolly slotting into the corner to give Liverpool a three-goal advantage.

So, was it one of his best for the club?

Salah smiled: “Yes, it was one of my best… I can’t say it was my best one so far, but I liked it.

“It was an important time for the team to feel comfortable in the game because the score was 2-0 and they had played well. We needed to kill the game and I think that goal made a difference.

“It is always good to score goals, but as I have said many times, the most important thing is for the team winning the game. As long as we’re winning, it doesn’t matter who scores.”

“I feel good,” he continued. “Last season and the season before I’d scored three goals after eight or nine games, so to score them after three or four games I am happy about it. But the most important thing is for the team to keep winning, winning, winning and winning.”

Newcastle United present the next challenge to Salah as his teammates as Liverpool resume action following the international break at Anfield on Saturday lunchtime.

“Newcastle is always tough, home or away,” the forward stated. “It is always tough because of the way they play and they have a good team, good players and a good coach.