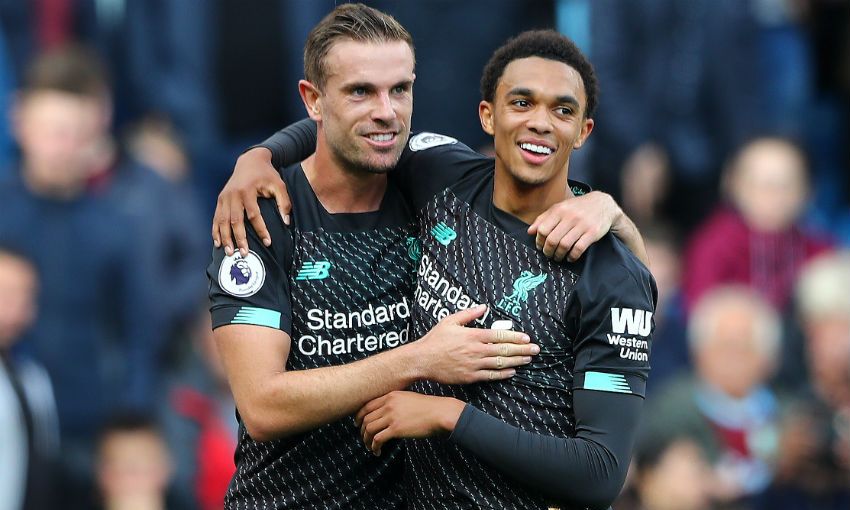 Jordan Henderson has allayed any concerns that he picked up an injury during Liverpool’s 3-0 win over Burnley on Saturday.

Another dynamic midfield display from the captain was brought to an end when Jürgen Klopp replaced him with Alex Oxlade-Chamberlain 20 minutes from time at Turf Moor.

The substitution came shortly after Henderson had sustained a knock in a collision with Aaron Lennon, but the skipper insisted he is OK fitness-wise post-match.

“I was all right. I was fine, I don’t know, maybe the gaffer thought I was hobbling about a bit. But no, it’s fine,” Henderson said.

On the impressive manner of the victory against the Clarets, which took the Reds on to 12 points from four Premier League fixtures this term, the No.14 continued: “I thought we did the dirty bits really well.

“We worked extremely hard defensively to win second balls, which is important against Burnley. The two strikers [Chris Wood and Ashley Barnes] are really physical.

“I thought we coped with them really well. Going forward we looked good at times and scored some brilliant goals. It was a really good performance.”

Henderson and his teammates also set another record at Turf Moor by becoming the first Liverpool side in the club’s history to record 13 straight top-flight wins.

The England international stated: “We’re not setting them [records] for anyone else, we’re setting them for ourselves. That’s what we want to do.

“We want to win every week, we want to perform every week and that’s difficult because there are so many good sides in the Premier League and in Europe. It’s really hard.

“Again, for us it’s game by game. We come up against different tests each week and it’s about giving everything every time we go onto the football pitch and we will see where we are at the end of the season.

“For me it’s just about concentrating on what we need to do. We have been very mature in our performances, especially away from home.

“We want to continue that form, keep doing the right things, keep working hard as a team. If we do that, we can put on performances like that.”