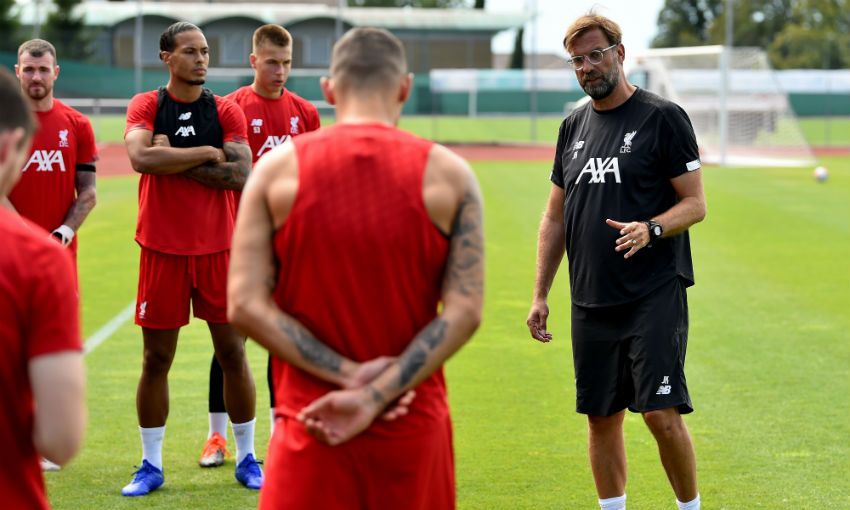 Jürgen Klopp acknowledges the task of improving does gets trickier the higher Liverpool reach, but insists there still should be more to come from his side.

The competitive action for the champions of Europe begins on Sunday when they travel to Wembley to take on Manchester City in the FA Community Shield.

The Reds boss believes matching the standards set last season should be the starting point for his team in 2019-20.

"The higher you get, the more difficult it is to improve as always," Klopp said. "But we still have a lot of space for improvement.

"How it is always in football, after a season, after a break, first and foremost you have to try to reach a level of last year again if it was a good one – and it was a good one. That's the first target we have. When that happens then you can make the next steps.

"It's not PlayStation where you can make the next skill or whatever. We have to bring people together, players together and do the same things in the right moment and stuff like this. This is always very important.

"A lot of things depend on confidence, stuff like this, where you can get this from, results. Improvement, being consistent, doing the same again would be improvement as well on the highest level, of course.

"But in specific points we can improve for sure."

Inside Training: Shooting practice and races in Evian

The job now is building on the win over Tottenham Hotspur in Madrid that secured the club its sixth European Cup.

While they enjoy reminiscing about the Champions League triumph, Klopp and his players are firmly fixated on the aim of delivering further trophies to Anfield.

The Liverpool manager continued: "The players are not the problem. These boys, how would they change in four, five weeks?

"It's all nice but, of course, it keeps you in that moment. I answer again questions about the Champions League final, it's no problem talking about it – but I want to be completely focused on the new season from a specific point.

"When we said we have to get rid of the backpack of the history of the club [so] we can make a step in the right direction, we have to make sure that our own history – even though it's a good one – doesn't keep us in that moment. That's very important, but we will do that.

"You have to learn it, nobody gives you a book and you read on how to deal with a Champions League win. You have to do it by yourself and we will do it.

"We did it already, the boys are completely fine, they are still the sensational characters from the last year. But now we have to prepare a new season and that's always a challenge."