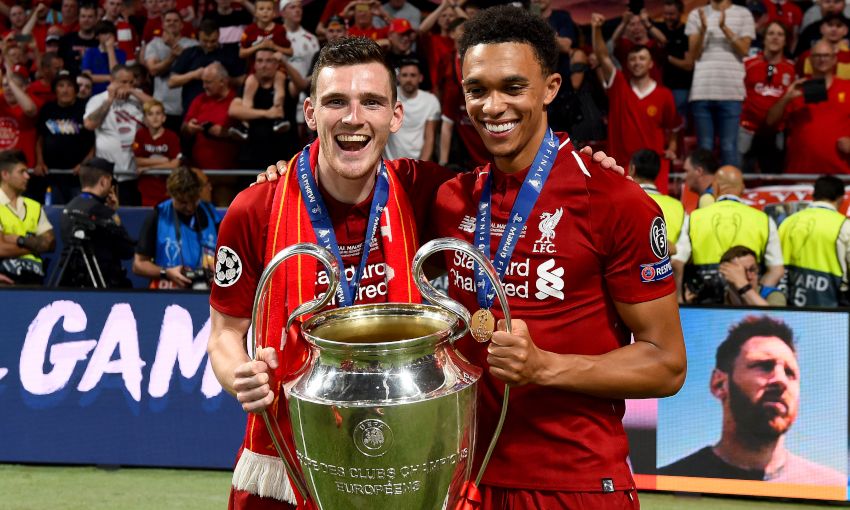 There will be a second edition of the assist competition between Trent Alexander-Arnold and Andy Robertson in 2019-20.

A friendly battle to create the most goals for their teammates last term saw the Liverpool full-backs make Premier League history as Alexander-Arnold claimed 12 and Robertson just one fewer.

Their attacking contributions in the Champions League, meanwhile, were a key factor in the Reds lifting the trophy for the sixth time in Madrid on June 1.

The duo only returned to pre-season training on Saturday but the inevitable conversation has already occurred – and the competition is going to be on again.

“We’ve had a brief discussion over it. We’ll set it up again,” Robertson told Liverpoolfc.com in Indiana, where the Reds are stationed for the first leg of their USA pre-season tour.

“Probably too much was made of it but for me and Trent it brought the best out of us, the numbers we both produced. Near the back end of the season he was unbelievable with the numbers he produced.

“I feel it brought the best out of both of us. If we can do that and get similar numbers this season, of course it helps the team. That’s what both of us want to do.

“But first and foremost we want to just put in the same performances we put in last season and try to kick on even further.”

Temperatures are soaring past 30 degrees in the afternoon where Liverpool are currently based in America, adding to the intensity of their pre-season programme.

Robertson acknowledged the added challenge of working in such conditions but also pointed to the long-term benefits of doing so.

“It’s not the easiest,” said the Scotland international, who declared himself ready to play after a recent procedure to deal with an infection in his hand.

“Some of the lads are ahead of me and Hendo and Virg. We came back a bit later. The lads are looking really sharp and we need to try to get up to that level now.

“In the next three or four weeks that’s what it’s all about – getting the best prepared possible for a big 10 months.”

Watch free: Behind the scenes on day one in America

Though focus is firmly on the Premier League opener at home to Norwich City on August 9, that fixtures is sandwiched by two one-off showpieces in the form of the Community Shield and UEFA Super Cup.

And Robertson reiterated the mood shared by the squad – that European Cup glory has only increased the hunger for silverware.

“We have got massive games from the off: Manchester City at Wembley in the Community Shield,” he said.

“Of course it’s the game just before the season starts but you’re still playing in a massive stadium against one of your biggest rivals. Then we’ve got Chelsea in the Super Cup.

“The biggest one is Norwich for getting the Premier League off to a good start in front of our home fans for the first time since we won the Champions League. That’s what we’ve got to use as motivation now – the winning feeling we had.

“Last season was completely different, we used the disappointment and heartbreak of losing as motivation to not be in that position again. That’s probably why we had so many last-minute winners, big comebacks and things like that.

“This season we need to use that feeling of being on that bus and lifting that trophy to drive us forward. We want more of that feeling. That’ll be in all our minds for the season ahead.”