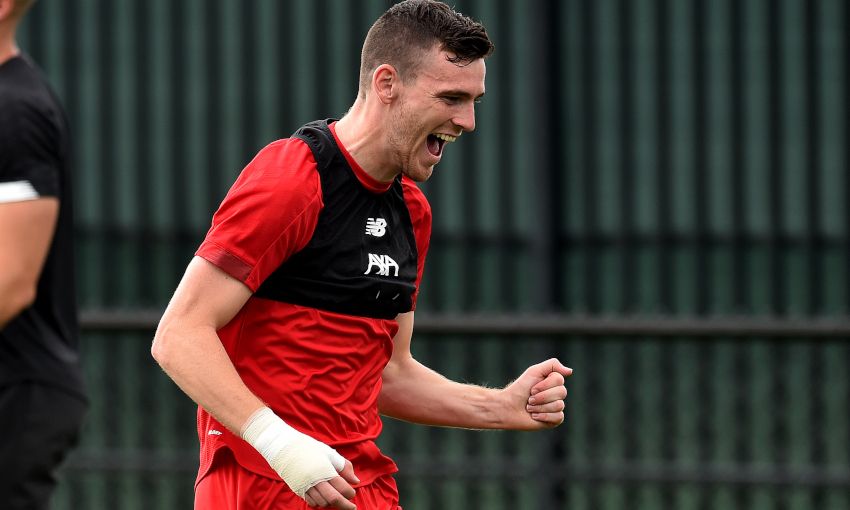 Andy Robertson feels ready to get back out onto the pitch whenever called upon by Jürgen Klopp after undergoing a minor procedure for a hand infection.

The Scotland international returned to Melwood last Saturday but had his pre-season programme delayed slightly due to the surgery.

Robertson was part of the squad that travelled out to the United States for the Reds’ pre-season tour, however, and reported positive news on his recovery following Wednesday morning’s training session.

The left-back is ready to feature in the three matches scheduled in America – including against Borussia Dortmund at Notre Dame Stadium on Friday night if selected by the manager.

“It’s up to the gaffer but I think I’m ready for Friday,” Robertson told Liverpoolfc.com. “We’ll soon find out! But in terms of my hand, I can just wrap it up and go for it, so I’m good to go.

“Whatever the manager does is up to him. But obviously we’ll get game time out here, we look forward to getting back out onto the pitch and playing again for the club. We’ve got a couple of big games coming up.”

Reflecting on the unusual nature of the injury to his right hand, he added: “And [it was] probably one of the most frustrating. It’s the first time I’ve ever been put to sleep, so it was a bit stressful but I was just glad to get it sorted and if you’re going to pick up something so strange like that, it’s good to get it out the way when I wasn’t back here.

“It probably ruined the last week of my holiday but it was all good, I just had to get it sorted and thankfully I’ve done it.”