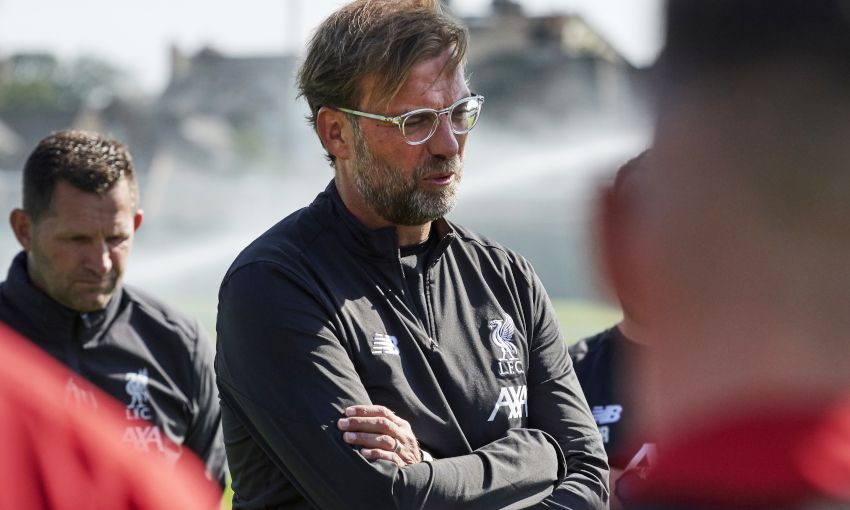 Jürgen Klopp was encouraged by the performances of the young and returning players handed opportunities in Thursday's 6-0 win at Tranmere Rovers.

Rhian Brewster struck twice at Prenton Park and was followed on the scoresheet by Curtis Jones and Bobby Duncan, with senior squad members Nathaniel Clyne and Divock Origi the others to net.

The manager praised all of the youngsters involved on the night for their application and, with several first-team stars still unavailable in pre-season, acknowledged the need for them to grasp the chances they are given.

“They were all good,” Klopp, whose side next face Bradford City on Sunday, told Liverpoolfc.com.

“Harry [Wilson] and Ryan [Kent] played outstandingly. Ben Woodburn, it was probably the best game I saw that he’s back, you see it in training already, he is really physically strong now, he is fresh again, sharp again.

“They all played really well. Yasser [Larouci] and Adam Lewis at left-back, good. Ki-Jana [Hoever] at right-back, good. I liked all the performances.

“Paul Glatzel, unfortunately we had to take him off and we’re not sure about that, it doesn’t look too good, but we have to wait. He is a wonderful kid as well.

“Dan Atherton came on and I never saw a performance like this from a goalkeeper as a striker, it was brilliant. It was all round a really good game.”

After Sunday’s trip to Bradford, the Reds will set off for a tour of the United States and friendlies against Borussia Dortmund, Sevilla and Sporting CP.

On the prospect of those young players seizing the chance to impress him, Klopp added: “They have to, we need them. The boys are big talents.

“Sometimes it is how it is in a young age group, you show up and then you have a little dip, but in the moment they feel fresh. There’s a lot of work to do, of course.

“On Sunday we play again. A couple of players are coming back – not for that game obviously but after that – so hopefully everything will be fine.”