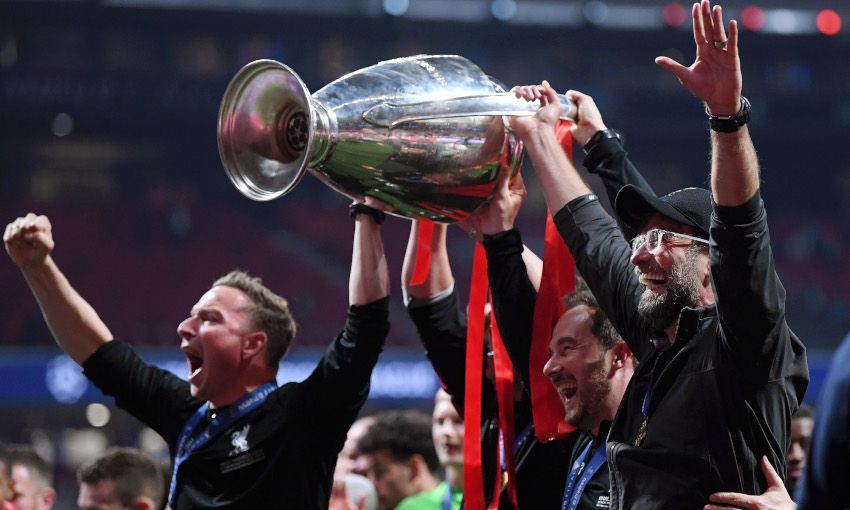 Three weeks' worth of Liverpool's meticulous preparations for the Champions League final paid off within 23 seconds.

After referee Damir Skomina blows his whistle for the first time at Estadio Metropolitano on Saturday, Liverpool battle three times for second balls with midfield-pressing situations.

After a back and forth, the Reds gather possession. They then instinctively look to find Sadio Mane running beyond Tottenham Hotspur's high defensive line.

Jordan Henderson sends the speedster beyond Kieran Trippier and it then leads to the breakthrough via the penalty spot. 1-0 Liverpool.

One week earlier, Liverpool are playing Benfica B in Marbella. It's a practice match being contested under the cloak of secrecy and in temperatures similar to that of Madrid's.

Jürgen Klopp's side, playing in purple on this occasion, win back the ball off their Portuguese opposition. They do so after three pressing movements from midfield. Mohamed Salah then finds Mane.

The No.10 is again the out-ball and running off the shoulder of the opposing right-back.

This time, he scores himself and it's 1-0 to Liverpool after 96 seconds.

"Incredible," Benfica B head coach Renato Paiva reflects on the two goalscoring situations, when speaking to Liverpoolfc.com. "Incredible, the similarity."

That painstaking planning from the Liverpool coaching staff and execution from its players are a major factor in the club now possessing its sixth European Cup.

“If you look at winners, you can be sure you are looking at a lot of detail behind. The Benfica B game is a very good example of this.

"We trained to have identity. When we have that, we know the players think similar at [the] same time."

With exactly 21 days separating the conclusion of the Premier League campaign and Champions League final, Klopp and his staff sought to arrange a warm-up match ahead of the meeting with Spurs.

They felt it would aid the players' fitness levels in the midst of a lengthy break and serve as a tactical dress rehearsal for the final.

The location was to be the Marbella Football Centre, where the squad were spending six days for a training camp.

But the opposition, firstly, needed to be available, while possessing a similar tactical footprint to that of Mauricio Pochettino's side.

To find one, Lijnders asked a former colleague of his at FC Porto for a recommendation.

He was pointed towards the reserve team of Benfica and with two weeks' notice, they agreed to delay their end-of-season holidays and began work on imitating Spurs as much as possible.

"I don't know if me, as a coach, will one day arrive to a Champions League final," Paiva says. "So this is an opportunity to stay a little bit close or near to that environment and to watch how a big team prepares for that game.

"The first action before arriving to Marbella was to study Tottenham and the way they play to find similar things with the way Benfica B plays.

"Then when we arrived to Marbella we had a meeting with the staff of Liverpool and they showed us the way they thought Tottenham will play in the final. They studied Benfica B also because there are similar things between both teams.

"After that meeting they asked for offensive-to-defensive behaviours to adapt our players to do during the game.

"The way we build up, it was almost equal to the way Tottenham build up. Lots of things were very similar and we were very happy about that."

After Mane's early opener - "our boys were a little bit nervous," Paiva reasons - the friendly finished 3-0 to Liverpool, with Alex Oxlade-Chamberlain and Curtis Jones also on the scoresheet.

No stone was unturned and every detail was analysed to the nth degree by Klopp and his backroom team ahead of the biggest game in club football.

From a coaching point of view, the 2-0 win in Madrid was earned from the hours and hours of grind on the training ground and in the analysis rooms.

"I thought Liverpool was very tactical, very precise in all the things that they do in the game," Paiva says.

"If I have to analyse, Liverpool were more brain and Tottenham were more heart. I think it was the victory of the brain in this game."