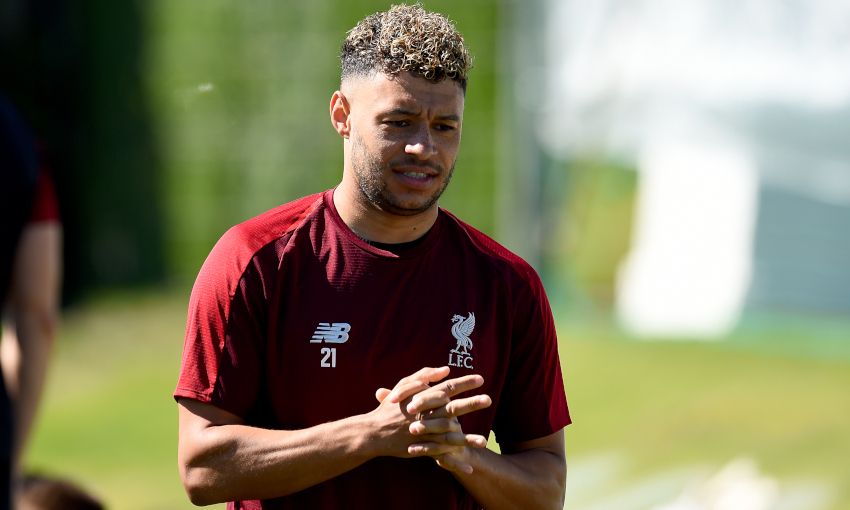 Alex Oxlade-Chamberlain admits he’s soaking up every minute of Liverpool’s Champions League final build-up having been denied the opportunity to participate in last year’s preparations.

A long-term knee injury sustained in the first leg of the 2017-18 semi-final against AS Roma last April left him facing a year on the sidelines, cruelly ruling out any involvement in the Kiev showpiece versus Real Madrid.

However, 12 months and two substitute appearances on, Oxlade-Chamberlain has joined his teammates at their pre-final training camp in Marbella as Jürgen Klopp and his staff ready the Reds for the meeting with Tottenham Hotspur on June 1 – and the 25-year-old is relishing every moment.

“I wasn’t able to get loads of minutes [in the final league games], but I was happy to just come back,” he told Liverpoolfc.com in Spain.

“Dreams are made of maybe having some part to play in Madrid, but it’s not about me – it’s about making sure whoever is on the pitch does the job for the club and for the team.

“If I can be involved, that would be amazing, but just to be around it and be fit and healthy again is good for me as well at the minute.”

It was during Liverpool’s last visit to Marbella – back in February – that Oxlade-Chamberlain took a significant step in his rehabilitation programme, joining his teammates in training for the first time since sustaining the original injury.

“That was a nice trip for me back then, being back in and around the lads for the first time,” he recalled.

“At times it’s been a little bit frustrating as well because you feel you are back and to then keep up with these boys after the long season they’ve had and the intensity they train at, coming back from a year [out] it’s not so easy and you pick up little things along the way.

“It’s been another little journey for me the last part, but it’s been really exciting to be in and around the team and in contention to maybe have some part in the final, but just to be involved is amazing for me.

“After crutching my way around the pitch last year, it’s nice to be in this situation!”

Liverpool arrived in Marbella on Monday evening and the players were put through a day of double training, starting the following morning – with sessions being conducted in searing temperatures.

“Obviously the final is going to be in Madrid, so a lot warmer than maybe an evening game in England that we’re used to,” said Oxlade-Chamberlain. “So, we’ve come out here to try to get used to that.

“Coming out here and making it a little bit tougher is obviously really, really helpful. The boys have approached it really well, as they have done all season. The gaffer is shouting and pushing us to stay right on top of everything – and that’s what we need. We’ve got one last push now and everyone looks really good.”

Oxlade-Chamberlain’s trip began in humorous fashion when he posted footage on his official Instagram account of Mohamed Salah catching some sleep on the floor behind his seat on the team plane during the squad’s journey to Spain.

The No.21 laughed: “It was like a free ticket for me when he pitched up behind me! It was nice he chose my seat and gave me a little something to do on the two-and-a-half-hour flight!

“I am always one of the ones that is lively in and around the dressing room with the boys. We’ve got a great group of lads, but I’m probably just the one who puts it on social media. Robbo is probably the one that is the most lively, he’s just not so active on his Instagram! We have a great bunch of lads and that’s the sort of spirit that has gotten us through to where we are today.

“The team spirit keeps building and performances have come with that as well, so hopefully there is something special for this group of lads in 10 days’ time. Hopefully we can pull something off and make some special memories and history.”