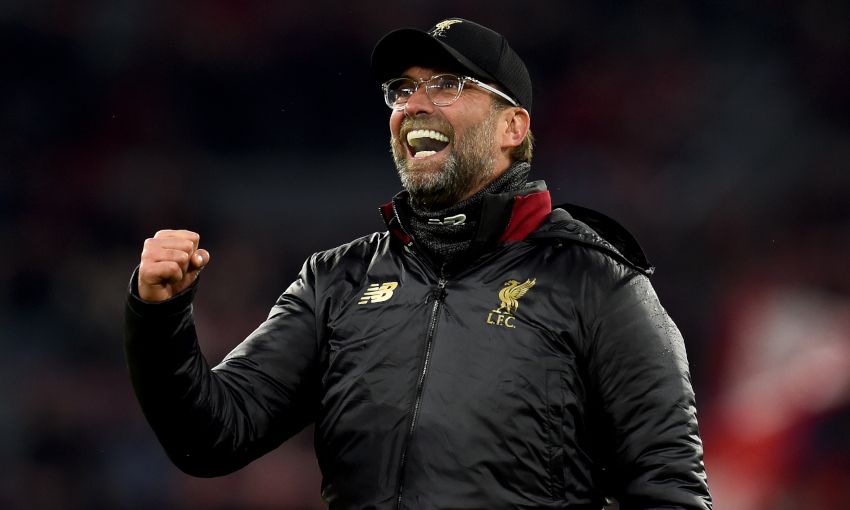 Jürgen Klopp will instruct his players to showcase 'LFC football' when the Reds meet Tottenham Hotspur in the Champions League final.

A second successive appearance in the premier fixture of the European club game awaits Klopp’s men at Estadio Metropolitano in Madrid on June 1.

Their place in the showpiece occasion was secured with one of the greatest performances Liverpool have ever produced in the competition at Anfield, a 4-0 dismantling of FC Barcelona to overturn a three-goal deficit in the semi-finals.

That achievement was emblematic of Klopp’s Reds project: energy, commitment and talent combining to become a force the opposition cannot stop.

The manager sees no reason to change that approach for the final and believes facing a fellow Premier League side has no bearing on how to prepare for the contest.

“We know each other pretty well, and that’s it,” Klopp told UEFA when asked if taking on a familiar foe in Tottenham differs to meeting Real Madrid a year ago.

“We know that already, so why should we think too much about it? If we are really at our absolute top level then we are a difficult team to play against, but we know Tottenham are as well.”

The date in Madrid marks a third Champions League final of Klopp’s managerial career, the German having also taken Borussia Dortmund to the 2013 edition and a narrow defeat by Bayern Munich.

Improvements away from home have been vital too, however, and the boss cites the 3-1 win at Bayern in the last 16 as a benchmark display in the team’s development.

“In Germany we have a saying: ‘All the best things come in threes’,” said Klopp.

“At Mainz, I missed promotion twice and we got promoted in the third season. We hope that it will repeat itself for the Champions League. I think it’s quite cool, to be honest.

“It’s a fourth European final for me [including the 2016 Europa League], that’s cool. I have had good teams and the players have gone beyond their limits in order to qualify. Throughout the years, we’ve knocked out strong sides like Borussia Dortmund thanks to Anfield.

“Anfield is a crucial factor for us in Europe, but the boys have done a great job, we’ve played great football. The away game at Bayern Munich was the best away game my team have played at the European level. It is great to see that such a development is possible and that we can become even more dominant.

“So far, it’s been a great campaign for us.”

Klopp has overseen a constantly upward trajectory since taking charge of the Reds in October 2015.

Progression to the League Cup and Europa League finals that first season was followed by a top-four Premier League finish the next campaign, and a journey to the Champions League final last term.

This season, a return to Europe’s elite fixture was married with an incredible pursuit of the domestic title that ended with Liverpool a point shy of Manchester City with 97.

Klopp feels his philosophy was embraced by the players within a week of his appointment but the process since has been carefully and gradually implemented.

And it hasn’t finished, regardless of what happens in Madrid.

“This is why it was clear how we wanted to play, but we didn’t want to push everything that way right from the start, we wanted to utilise the qualities of the players and give them more confidence so they would have that belief that they are the right players for Liverpool.

“But of course you need time until you can see that on the pitch. I don’t know how much time it took, but it certainly took some time. In the first year we reached the Europa League final and the League Cup final, we lost them both, but it was a very strenuous season.

“The development of the players who were there helped us a lot; of course, the new signings helped us a lot as well. Alisson [Becker] and Virgil [van Dijk], for example, have had the biggest impact because they have played in almost all the games.

“But players such as Fabinho and [Xherdan] Shaqiri are very important parts of the team, too. But then again, they are not at the top of their game, but they’ve made important steps in their development. The journey is not over, not for anyone.

“This is why we feel like we are only at the start, and that there is still a lot to come.”