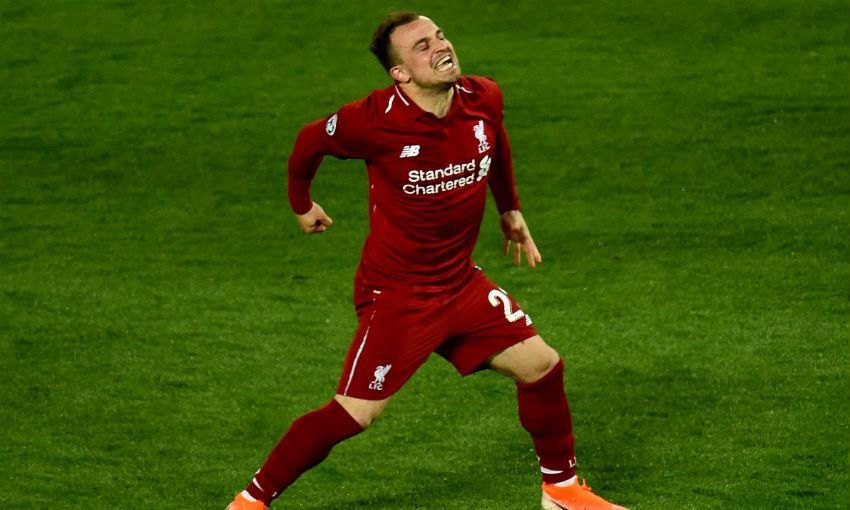 The sight of some fans moved to tears after Tuesday's historic comeback over Barcelona is a memory that will live with Xherdan Shaqiri forever.

Jürgen Klopp's side produced arguably the greatest European night in Anfield's history by overturning a three-goal deficit in the Champions League semi-final, winning the tie 4-3 on aggregate.

And a second successive European Cup final is a fitting reward for impassioned Liverpool supporters, according to Shaqiri.

"Difficult to speak now after what happened tonight here," the No.23 told Liverpoolfc.com. "Unbelievable performance, unbelievable fans - they pushed us.

"I never saw this in my life. It was something special tonight, a special night at Anfield definitely.

"It's crazy, it's crazy, it's unbelievable what we achieved today. It's difficult to speak about this crazy game because we are still full of adrenaline in our bodies, celebrating.

"I'm just really proud of this team, for these fans - they push us all year. All year they are behind this club and the fans are something really special.

"I saw people crying and that's given me something special. I don't know what to say. It's just incredible what we achieved today for these fans. They are behind us.

Liverpool will battle either Ajax or Tottenham Hotspur in Madrid to be crowned champions of Europe's premier club competition.

But before the June 1 spectacle, the Reds conclude their Premier League campaign on Sunday at home to Wolverhampton Wanderers and still possess a chance of securing the title.

"The season is not finished yet," Shaqiri added. "We play at home and it's obviously going to be an amazing atmosphere.

“I can't wait to play on Sunday and to [make] the last game of the season a nice one. You never know what happens.

"We are looking forward and it's going to be a nice game on Sunday. Let's see what happens."