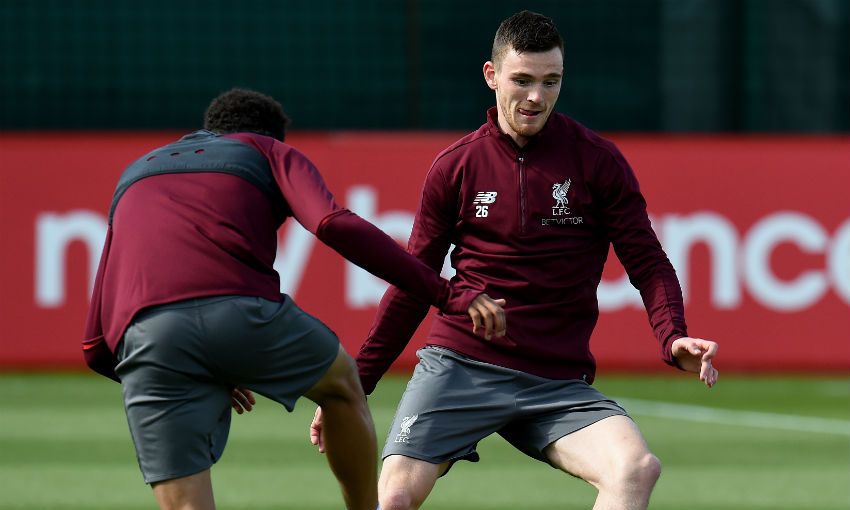 Andy Robertson believes just one goal could change the mood of Liverpool's encounter with Barcelona on Tuesday night as he acknowledged the Reds need to take risks in the second leg of the Champions League semi-final.

Jürgen Klopp's side need to overturn a 3-0 deficit from the first leg at Camp Nou in order to reach the final in Madrid.

But with expectations tempered and a rousing atmosphere inside Anfield, Robertson insists the seemingly impropable could still happen against the Spanish champions.

Asked by Liverpoolfc.com what the approach will be, the Scot said: "Different, but I think it would be daft if we went completely gung-ho because with the players they've got, they can pick us off from time to time.

"I think we had more than three opportunities at the Nou Camp and we played a good game.

“Of course there's going to be times where we need to take a wee bit more risks going forward and taking a few more chances. If we do that then you never know.

“If we can put them under pressure and get the first goal then we'll see how they react because we know the fans will react positively with us and they can hopefully have an impact on them.

“Let's just see what happens. We have no real pressure on us now, nobody expects us to do anything. But if we can then it will one of the greatest comebacks.”

Liverpool will be without Mohamed Salah and Roberto Firmino in the duel with the Blaugrana after they were ruled out through injury.

Robertson, however, has backed whoever replaces the forward pair to deliver at Anfield due to the quality and team-first mentality within the squad.

Xherdan Shaqiri, Divock Origi and Daniel Sturridge are likely candidates to step up, while Rhian Brewster is set to be part of the matchday squad.

"Especially the first three you’ve mentioned, they've been fit and carried this squad obviously with disappointment of not playing," Robertson continued.

"But they've used it in the right way by putting 100 per cent in training and pushing the lads that are playing to their absolute maximum.

“That's why I think the boys on the pitch have played so well this season - because we get pushed by the people off it. But people on the outside don't really see that and the lads won't get the credit they deserve, but the whole squad have been magnificent.

“Rhian's a different kettle of fish. He's been out most of the season. Now he's come back and he's been doing well in training and scoring goals for the U23s.

“If he is involved or whatever then it'll be incredible for him. He's a confident lad and he's got no doubt in his ability and neither does anyone at Melwood.