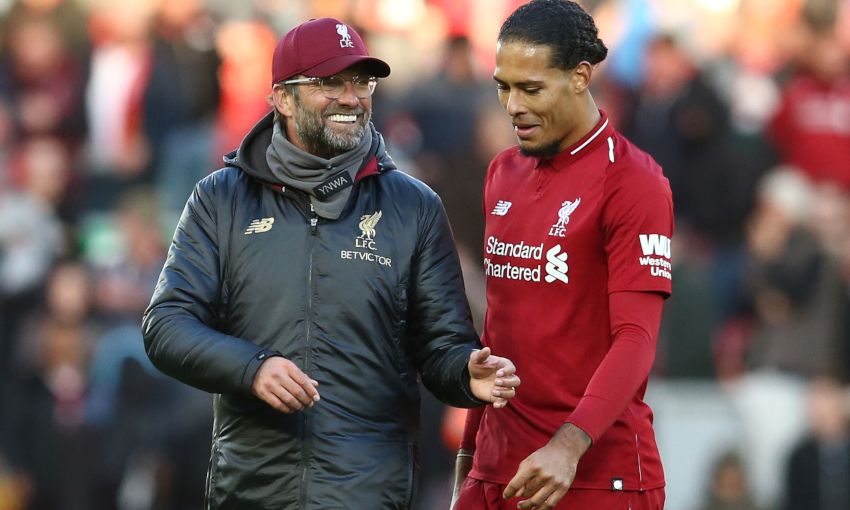 Liverpool manager Jürgen Klopp sent a special message to Virgil van Dijk as the centre-back was named the 2018-19 PFA Players' Player of the Year on Sunday night.

The Netherlands international collected the award, won by Reds teammate Mohamed Salah a year ago, at a ceremony in London after a stellar season at the heart of his side’s defence.

And Klopp, who signed Van Dijk from Southampton in January 2018, hailed his No.4 as ‘the man’ in a video message played at the PFA Awards ceremony in London.

“I’m really proud it’s the second time in a row I can speak about a wonderful player who won the award for Player of the Season: Virgil van Dijk,” said Klopp.

“Who would have thought that when he started back in Holland? I think not everybody saw immediately what kind of player hides in this giant body.

“But now the whole world is aware of that and I’m really happy I can be a little bit around that development. I would love to think it’s because of me! But obviously it’s not, he was already the player he is now when we bought him from Southampton.

“It all worked out. From the first moment I was so excited about the opportunity to work together and now you are the man – at least for this season!”

Four Liverpool players were named in the PFA Premier League Team of the Year for 2018-19, with Trent Alexander-Arnold, Mane, Andy Robertson and Van Dijk selected in the XI by their fellow professionals.

“I have exactly the same pride for Sadio, Robbo and Trent because we all know in the moment we have a pretty special group of players here together,” added Klopp.

“That all gave you the opportunity to play the season you played. You deserve the award, no doubt about that, but I think you agree there could have been three, four, five, six more players in the Team of the Year with a Liverpool shirt on.

“But because City play a good season as well, it’s OK that a few of them are in the team!”