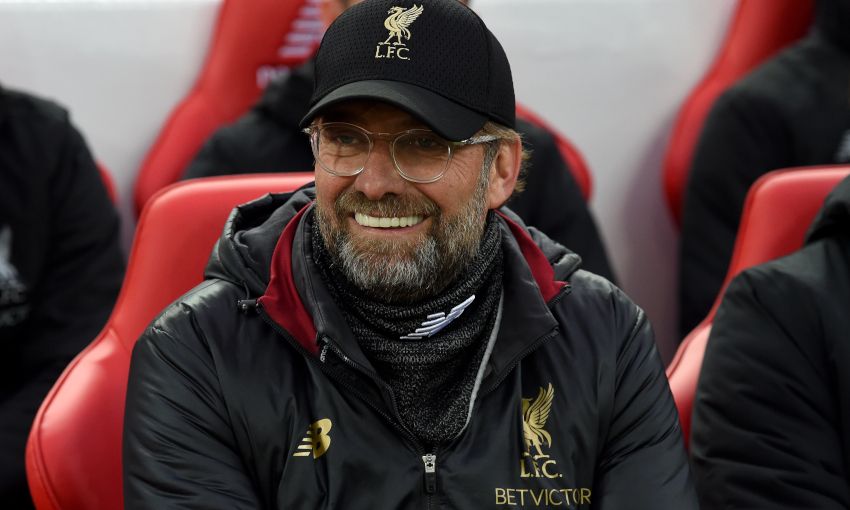 Jürgen Klopp insisted Liverpool will focus on achieving a total of 97 points after returning to the Premier League summit with a 5-0 win over Huddersfield Town.

Sadio Mane and Mohamed Salah each scored twice to follow up Naby Keita’s opener at Anfield as the Reds leapfrogged Manchester City by two points having played a game more.

The clash with the Terriers also saw the first-team return of Alex Oxlade-Chamberlain, who came on as a second-half substitute after a year on the sidelines.

As well as providing a fitness update on Roberto Firmino and Virgil van Dijk, the manager discussed Liverpool’s performance, Mane’s goalscoring, the title race and more in his post-match press conference.

Read a transcript of Klopp’s replies below…

We analysed before the game that these passes, if you can put pressure – you saw the distance of Naby in that situation was pretty big actually, but with two or three really quick steps he was there. I was surprised, so how can the Huddersfield player not be surprised there is somebody? Because a second ago nobody was around. It was a brilliant situation of Naby and then the gaps are open. For me, the goal was actually a bit too early. I have no problem with early goals but after all the preparation, all we said about how difficult the game is, I really think the game showed how difficult it could have been if we were not that clinical in the goalscoring situations because Huddersfield did well. 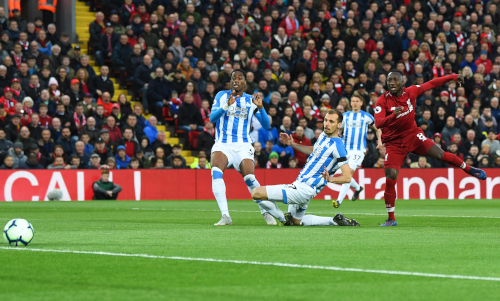 And after the early goal they did really well; at set-pieces and all that stuff, they were in our half and passing around. We had to defend, because of the early goal, we were always kind of a second too late and we had to close these gaps with hard work. The boys did that, we got the momentum back and then it was our game. We played really well, scored wonderful goals, did all the things you have to do against a good but deep-defending side. We scored the goals in the perfect moment: really early, really late and in the middle somewhere. That’s good. The second half, start again, and it was clear Huddersfield are a really proud team that fought for that and didn’t let it happen easily, but we scored wonderful goals and had more chances so it was a brilliant, brilliant night.

That’s the plan. People expect if you pay money for a player that you come in and from the first day you show everything you are able to do. That would be nice if it’s always that easy. It’s not. Naby needed time, we gave him the time and now he is there. It was for sure his best game tonight, in a lot of departments. He was calm in the right moment, very, very positive-aggressive in the right moments, winning balls, blocking balls, closing gaps, passing balls, being safe with the ball, turning and creating with that moment. It was just a brilliant game.

And then Oxlade after more than a year, bringing him back was the 100 per cent plan if there was any chance tonight, any, because we try to be very careful with him. It’s a difficult situation after that long time and all the demands of the Premier League. The training for being ready for the Premier League is already demanding. He had these little, little setbacks in training and now he’s ready. That’s cool, really cool. He showed that and it was a wonderful situation, it would have been Goal of the Season if he could have scored that one. It was brilliant play, a brilliant run and move, everything – unfortunately, he didn’t hit the ball right. But [it was a] really important step tonight for him and for us.

On whether Mane’s goal tally has come as a surprise…

No. He always had the ability to do that but it looked like his mindset was more a creator, a door-opener than somebody who runs through the door as well. But of course it is all-in with Sadio. We saw this year he can play easily as a No.9 as well. You see how he is in the air. The third one, it looks like he stands in the air really and then hit the post. It’s cool. We are where we are because the boys are as good as they are. That’s really cool. But they couldn’t score if the boys from the wings didn’t pass all these balls, or Hendo again from the half-space with a brilliant ball, really from the training ground. It’s nice to see all these things, it’s cool, nothing bad to say about it.

On what a total of 91 points says about his team…

It’s a good team. I know which direction the question leads because everybody is asking me that. 91 points is crazy but it’s only possible because the boys played like they played, because the boys have the attitude they have, the mindset they have, they keep the mood they are in. That’s so important. At the end, we cannot do more than win these games; that’s what we did so far and that’s what we’ll try to do again. Why should we think where City could slip or not? We play Newcastle in the league, that’s their last home game. I’m not sure there’s a traditionally outstanding relationship between the cities, exchange of points when you need it. That’s not like it is. We will go there and they will fight with all they have in the last league game. We have to be ready. And then the last game, Wolves, wow, maybe it’s like this that if they win they are for sure seventh in the league. If they want to be that and go for that, you will see that as well. They are a really difficult team to play against, not only Arsenal felt that – a lot of teams felt that and will feel that.

So we don’t have to think about something else. If we do the job in these two games and something happens in the other games, then we are there. If not, then we still did our best – our 100 per cent best – and that’s the only thing you really can expect from us. You cannot ask for luck, you cannot ask for destiny, you have to work for it and then the rest around happens. That’s exactly what we do. I wasn’t 100 per cent sure what happens when United played City, I came into the training ground the next morning and the mood was exactly like before, really good, nothing changed. We had to watch it or we knew about it because we didn’t play and there was a good football game on TV, so we watched it. But it has nothing to do with us really. If we can have 97 then let’s go for it and then we will see. It’s still history. We said we want to create our own history – that’s what we tried, that’s what the boys did, that’s what Mo Salah did tonight again, with the points tally we have and all that stuff. These boys are outstanding, that’s the reason why we are where we are. Let’s carry on and we will see where it ends.