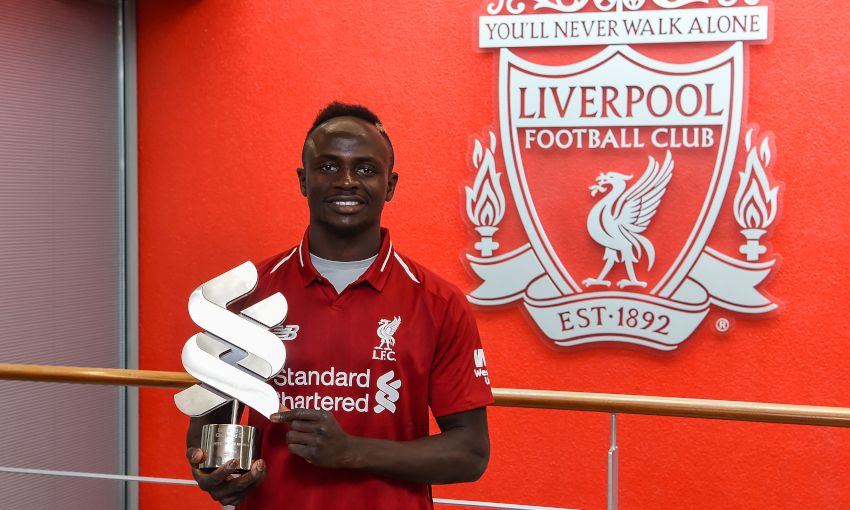 Sadio Mane has been named Liverpool's Standard Chartered Player of the Month for March.

The No.10 continued his rich vein of form throughout the month, scoring five times in five appearances to help the Reds remain in contention to win both the Premier League and Champions League trophies.

Those five goals arrived in the space of just seven days, with braces against Burnley and Bayern Munich being followed by his 20th of the season in all competitions during the 2-1 victory at Fulham.

Asked if March was his finest month for the club on an individual level so far, Mane told Liverpoolfc.com at Melwood: “I would say it was one of the best. I’m happy to win the award.

“It was one of the best individual months for each player because we did very well and won almost every game. It was a great month.

“To get it from the supporters is something incredible. The only thing I do is give every single match my best, to score goals and give assists for my team to win the game. I’m looking forward to winning more games with the team.”

Of his five strikes, Mane chose the opening goal in the Champions League clash with Bayern at the Allianz Arena as his favourite, somewhat modestly describing the effort as ‘lucky’.

But pressed to explain the quick thinking and technique behind an outstanding piece of solo skill that set Liverpool on course for the quarter-finals, he said: “It was a great pass from Virg.

“When I made the first contact I wanted to chip the ball with my right foot, but when I saw the goalkeeper I changed my mind and tried to go onto the left side.

“Before I shot, I saw the players going towards goal so I tried to chip it so it would be difficult for them to touch the ball.”