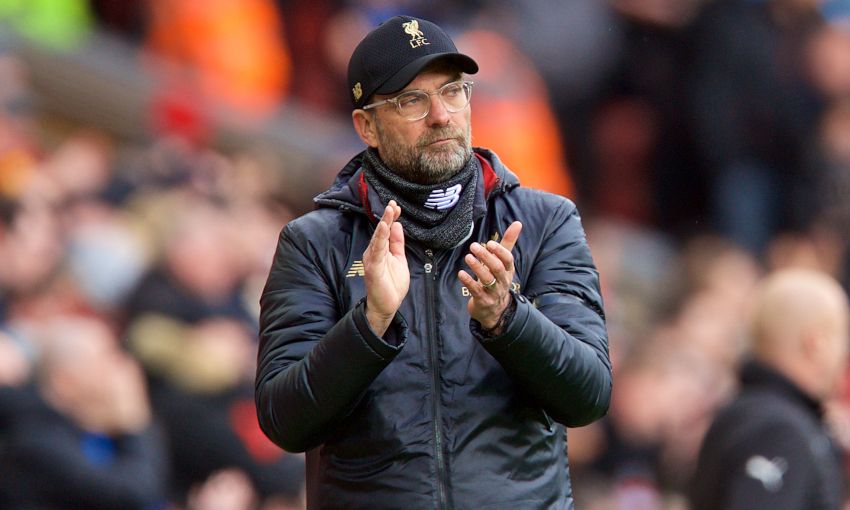 Liverpool must be 'exceptional' to overcome Bayern Munich in the second leg of a Champions League tie Jürgen Klopp considers an 'open game'.

A goalless draw at Anfield last month means Wednesday night’s return meeting between the Reds and the Bundesliga leaders is intriguingly poised.

Finalists in the tournament last season, Klopp’s side can reach the last eight with a win or a score draw at the Allianz Arena and he sees the simplicity of those permutations as helpful for his players.

However, the manager believes a ‘normal game’ will not be enough to achieve the required result against a team that have won their three league fixtures since visiting Anfield by an aggregate score of 12-1.

“It’s not for me to judge what they do, or did,” Klopp told Liverpoolfc.com when asked if he expects a different approach from Bayern in Germany to the first leg.

“They are in a different moment now obviously, it’s a much more positive moment for Bayern – top of the table again, winning games comfortably again and all that stuff – so they are really back on track… if they ever left the track. I like that, not because I think it’s easier, just because it shows you in the analysis how strong they are.

“We are strong enough to give them a proper game and that’s the only thing you can expect in a situation like that, in a good situation. That’s what I’m thinking about: how can we cause them problems they have never had in the season so far against other opponents?

“They have, of course, really strong opponents but if we are at our best we can be exceptional. But we have to be, actually – if we play a normal game there we have no chance and then we should go out.

“But if we can push ourselves in a special mood and play a proper football game, then we have a proper chance and that’s all I need.”

In his immediate post-match assessment after the stalemate with Niko Kovac’s Bayern at Anfield, Klopp predicted the scoreline would feel better for Liverpool by the time of the second game.

So, now it has arrived, how optimistic is the boss about progressing to the quarter-finals?

“As optimistic as possible before a game against very strong opponents,” he replied. “It’s just an open game, that’s actually the only thing you need for the second one.

“We had different situations [last season], we were 3-0 up against City and 5-2 up against Roma and it’s always kind of a hidden danger still, if you want, that you think, ‘OK, we should be through’ but you are not actually.

“With a 0-0 everything is clear: you have to win the game. That’s what you always want. In this specific case, you can win the game with a draw as well, but it’s all clear – we have to play a really good game.

“And nothing happened yet. There are two games, the second one starts on Wednesday night and everything is good.”

Bayern’s attack will be led by Robert Lewandowski, the top scorer in this season’s Champions League with eight goals and a player with whom Klopp worked for four years at Borussia Dortmund earlier in their respective careers.

Cutting off the supply to the Poland international is the most effective way to nullify his threat, according to the Liverpool manager.

But the Reds cannot afford to concentrate solely on Lewandowski, warned Klopp, given the quality spread throughout the opposition XI.

“Robert is a world-class striker, no doubt about that. But he has different strengths and skills, it’s not that you can say, ‘If you avoid that then he cannot do that’. We are experienced enough and good enough,” he added.

“How it always is with good strikers, the more you can avoid the passes and crosses to him, the better it is. That’s what we are all working on and that’s what we have to work on actually.

“Of course, it’s not only Robert. There will be different players; Coman is back in training, Ribery is in good shape, they rested him a couple of times and now he will be ready to go for sure, Gnabry is in maybe the best moment of his career, really good. That’s all [only the] offensive [options].

“In midfield they have different options – Goretzka is back, James could play, Martinez will play, Thiago Alcantara can and probably will play. They have a lot to offer.

“That makes it so exciting, you go through the Bayern team and think, ‘Wow, they are really strong’ and then you think, ‘Ah, we are not too bad as well!’ That’s cool.

“How I always said: if you want a guarantee, don’t watch the game. If you want the chance, watch it!”