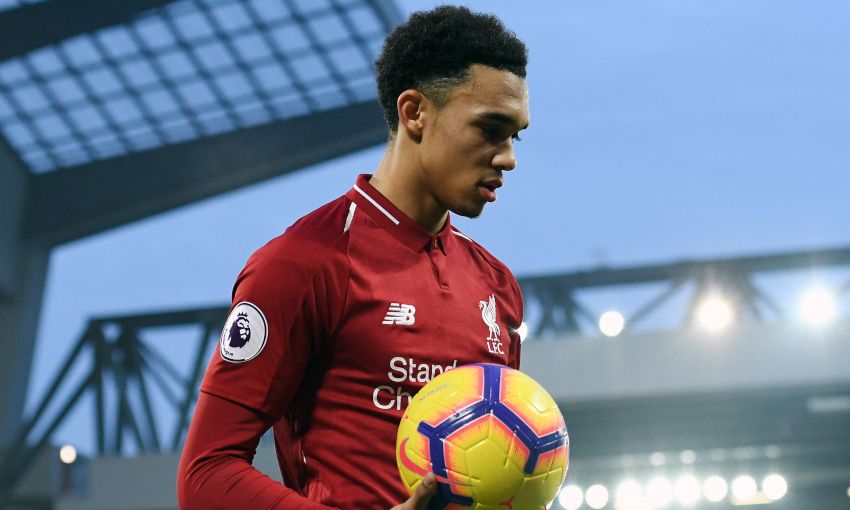 Trent Alexander-Arnold was presented with the match ball in recognition of his hat-trick of assists in Liverpool’s 5-0 win over Watford on Wednesday night, Jürgen Klopp has revealed.

The full-back teed up Sadio Mane’s two early goals at Anfield before supplying a sublime cross for Virgil van Dijk to power in a header for the Reds’ fourth of the night.

Fellow full-back Andy Robertson also got in on the act, claiming two assists of his own, and Klopp feels offensive contributions are a fundamental component of what the position requires in the modern-day era.

The boss told his pre-Everton press conference: “It’s important. That’s modern football. If you ask a young boy his favourite position, I don’t think a lot of boys would say: ‘I want to be a full-back.’ But football changed, they became much more important.

“I was a full-back myself for a decent part of my career, it didn’t look completely different to what the boys are doing but I know there are a lot of things to do. You have to be really strong defensively but on the other hand, because a lot of teams clear the wing for the full-backs offensively, if you are then able to be open-minded enough and have the football quality to see some people in the same shirt in the box, that helps a lot.”

On Alexander-Arnold’s impact specifically, Klopp added: “That game was exceptional; I don’t think I was ever part of a game that somebody had a hat-trick of assists.

“It was special. He wanted the match ball so he got it. It was really cool. Now let’s try to do something like that again.”

Meanwhile, Klopp is hoping Liverpool can build on their prowess from set-pieces after both of Van Dijk’s efforts stemmed from dead-ball situations on Wednesday.

“Who scores is actually not important,” Klopp said, in response to a question on whether Liverpool require goals from other areas of the pitch.

“Yes, of course you need goals from set-pieces – it’s very, very important. I loved the first one because it was a really, really good cross; I would not say it was an easy goal for Virg, but it was not the most difficult he scored in his life because the cross was already worth a goal. You need to be ready in all departments and set-pieces helped us, especially in the beginning of the season, quite a lot.

“That disappeared a little bit in a specific part of the season, but now hopefully we can get it back because I love scoring goals from set pieces. You have a lot of set-pieces in a game, so we need to be good in that.”