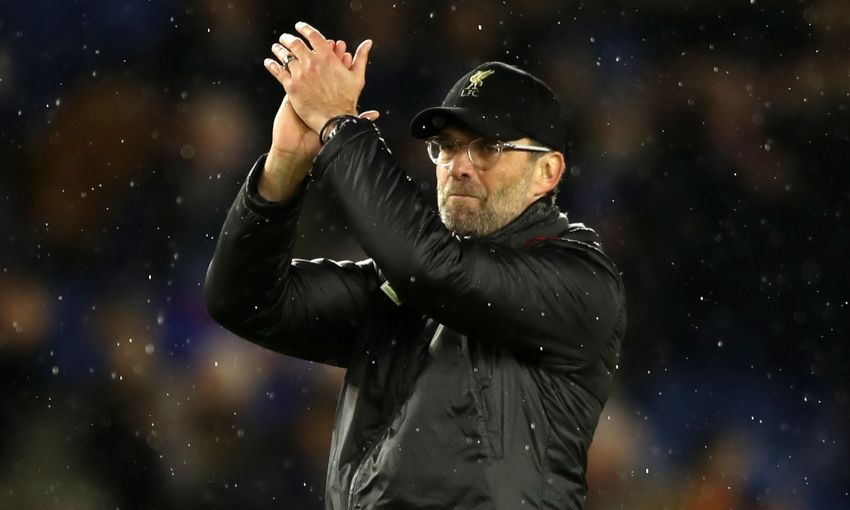 The result ensured the Reds moved a point clear at the summit of the Premier League table – and following the stalemate, fans vociferously made clear their delight at that fact.

And Klopp feels such unity will be required on and off the pitch once again tonight when Watford visit Anfield in the latest round of top-flight fixtures.

He wrote in his column for the official matchday programme: “Firstly, I would like to thank our amazing supporters for their backing and their warmth in Manchester at the weekend. Like everyone associated with LFC I was really hoping we could make the afternoon there a special one, so the 0-0 scoreline didn’t fulfil the ambition we arrived with.

“However, at Old Trafford, because of the layout of the stadium, to perform the media duties I have to walk pitchside after the game and up into their main stand to attend the post-game press conference.

“On Sunday, presumably because our fans were held back by the authorities, as I was doing this walk all our supporters were still in the away section. I always think after the game it is our responsibility to thank them, not the other way round, but I loved the reception they gave. Thank you.

“More importantly I loved the message they were sending. They were on the front foot. Our supporters were full of positivity for our position. I will be the first to admit we had not quite given them the performance we had all hoped for over the entire 90 minutes – but there were circumstances around this and our supporters are knowledgeable and appreciative of the desire and the effort.

“There was also a defiance in them that I really love. They were shoulders back, chest out and proud of what we do together. Absolutely the attitude and mentality we all need. I saw and I heard the passion and it filled me with belief and all I could think is ‘We are Liverpool’ and that’s all that matters.

“As a coach and manager you can’t promise or guarantee anything beyond making the personal commitment to give everything you have for the club you serve. I ask the same from everyone at the club, be it players or staff. Give nothing less than your everything and I’m with you all the way.

“At Old Trafford on Sunday we gave our all. Against Bayern last time out at Anfield we gave our all. Neither was enough on that occasion to win, but we were strong and resolute and we made sure we still got a result. These qualities should not be underestimated.

“To be successful you need to combine and use all your tools. It is not enough to be good in one particular area and neglect others. Part of our progress together, as a group, has been that we have learned and adapted and become more resolute.

“Nobody takes points from Liverpool now unless they are prepared to prise it from our clenched fist – and I haven’t seen many this season that can beat us when it comes to will and desire. Our core values remain – which is that we are a team built on positivity and attacking intent. It flows through our veins. We approach games also with the view of ‘what can WE do today’ – never ‘what can we do to stop our opponent’.

“We remain a side whose focus is always forward, but I only see positives in the fact we have solidity also. It’s a combination that helps you be successful. The many qualities we have, as a team, will certainly be needed tonight if we are to get the outcome we want.”