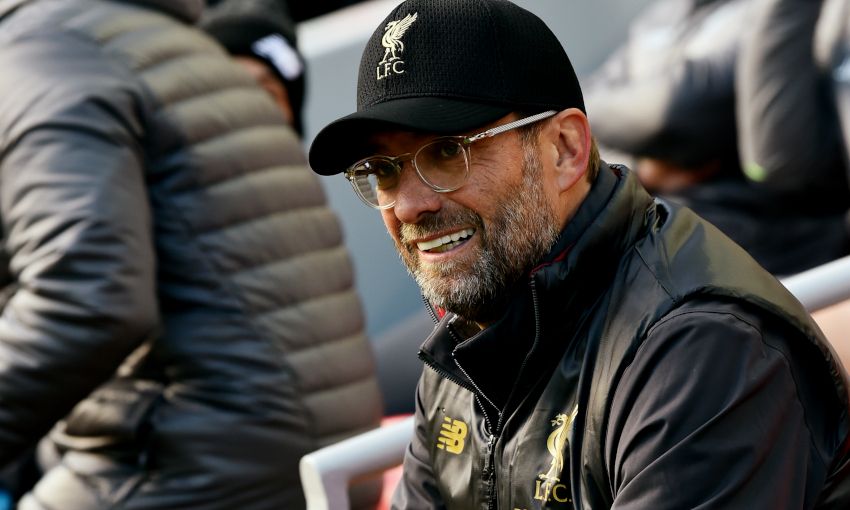 Liverpool have a 'pure opportunity' in the Premier League title race insisted Jürgen Klopp as he previewed Wednesday's meeting with Watford.

The goalless draw at Manchester United last weekend lifted the Reds a point ahead of reigning champions Manchester City with 11 games left to play this season.

And Klopp explained why everyone connected to the club should take a positive outlook on what is possible in the final months of the campaign.

Asked at his pre-Watford press conference if Liverpool have no margin for error in their remaining games, the manager replied: “We don’t have to look that far.

“We are not that experienced in winning the league. [But] it’s so positive, so positive. If you only judge the moment and see the opportunity then everything is fine.

“But if you always look one, two or three weeks back, where we dropped points, where we conceded goals, thinking ‘we have to win that’ not ‘we can win that’, that makes life a little bit more uncomfortable, that’s the truth.

“We have to make sure we can really feel that and can use that because it’s an opportunity.”

Watford make the journey to Merseyside having recorded one of the most eye-catching results of the previous round of fixtures, a 5-1 victory at Cardiff City.

Javi Gracia’s team have lost only two of their past 12 Premier League matches and Klopp is aware of their ability to switch styles dependent on their opponents.

“Watford are a difficult one, of course. They are on a good run and they play different styles of football,” said the Liverpool boss.

“We made the analysis; against the top six they don’t have a lot of possession but they are a proper counter-attacking threat, good around set-pieces, good around second balls, deep defending. When they play other teams they are much more proactive.

“We need to be ready for both but we will probably have the ball for some time in the game and we need to do something with that, of course. It’s a difficult Premier League game against a good side.”

Roberto Firmino is a doubt for the encounter after sustaining an ankle problem in the first half of Sunday’s stalemate at Old Trafford.

Quizzed on what those in reserve can do to earn a chance to play if the No.9 is ruled out, Klopp said: “They cannot do a lot in this week to show me they are ready but that’s the nature of the thing – if you play at a club like Liverpool a few players don’t have 500,000 minutes before they start their next game.

“But there’s still a lot of quality. If we have to change a few things, we will change. We changed a couple of things during the season.

“Obviously Bobby was pretty much always involved and it’s possible that’s not the case this time, but we obviously have options and we will use from the start one of them and maybe during the game a second one.

“If there’s anything good in that, it’s only that Watford have no clue what we are doing!”