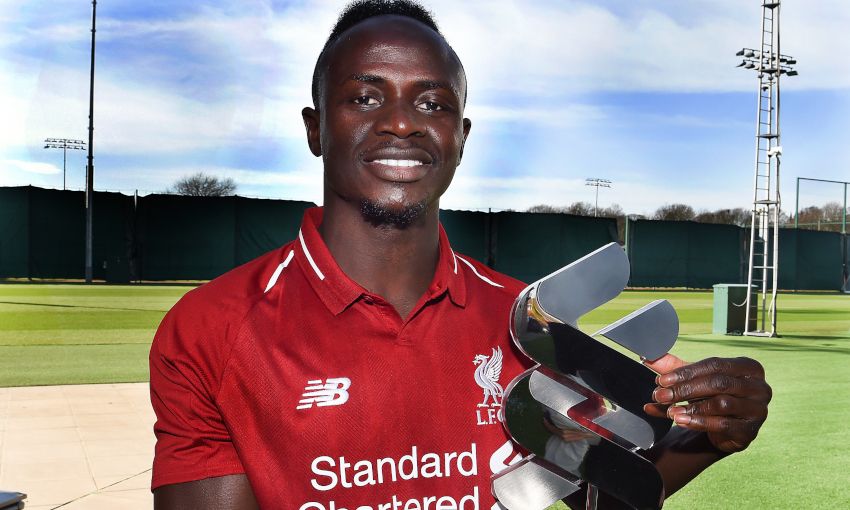 Sadio Mane has been named Liverpool's Standard Chartered Player of the Month for January.

The No.10 held off competition from second-placed Mohamed Salah and Roberto Firmino in third in a fan poll carried out on Liverpoolfc.com to land the prize for the first time this season.

Upon being presented with the trophy at Melwood, Mane said: “I just try to do what I can. As a team, I think there were a couple of difficult games for us because we like to win. But that’s part of football. We have to keep going, work harder and harder and get the results.

“We try to push as hard as we can and we still had [mainly] positive results.

“An award is always motivation, but I am always motivated as a player, to be honest. I am happy that the fans have voted for me and I would say to them we’re going to try to do everything to make this season special.”

Mane started all four of the Reds’ Premier League matches during January, scoring in the 4-3 win over Crystal Palace at Anfield and the 1-1 home draw with Leicester City.

“[Improving] is what I am trying to do all the time because it’s what I have to do,” he said. “Since I joined Liverpool, I have tried to get better and better – and that’s what every football player wishes for. That’s why I keep working hard, but it’s football.

“For sure, you do always your best, try to work as hard as you can and help the team.”

The Senegal forward has been in fine form in February, too, netting versus West Ham United and Bournemouth in the Premier League before completing the 90 minutes of Tuesday’s Champions League last-16 first leg against Bayern Munich at Anfield, which ended goalless.